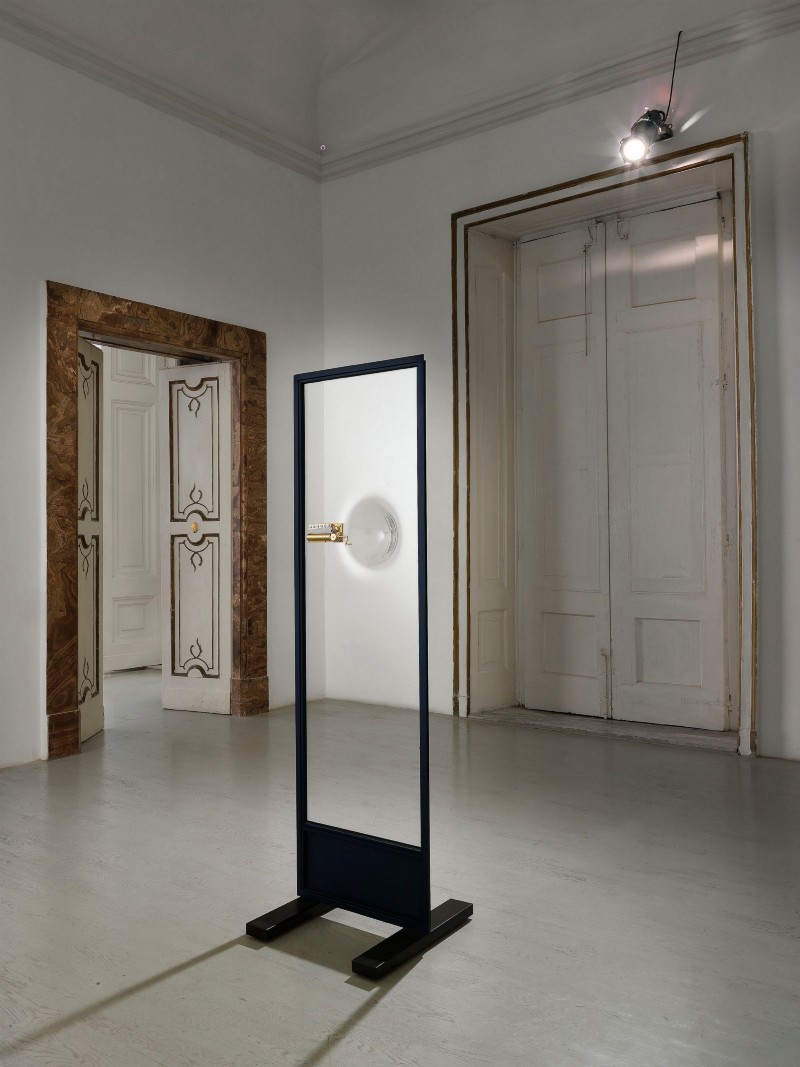 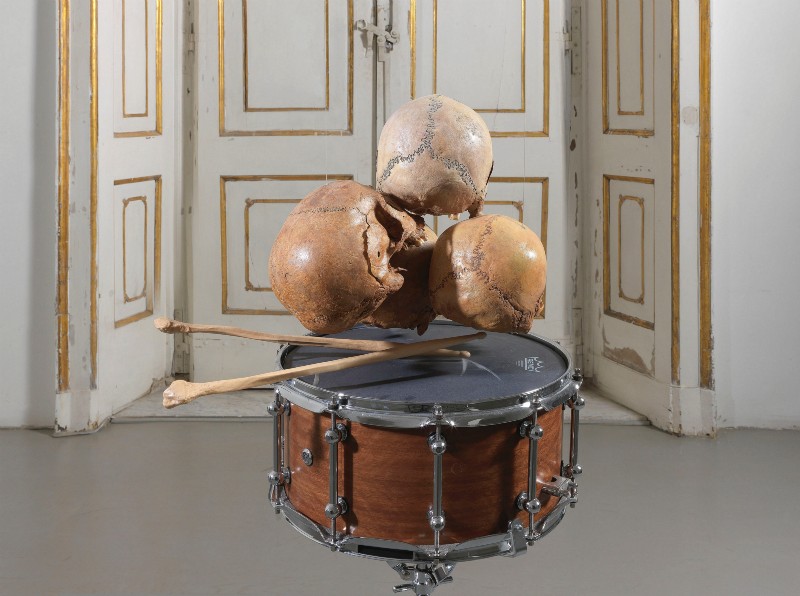 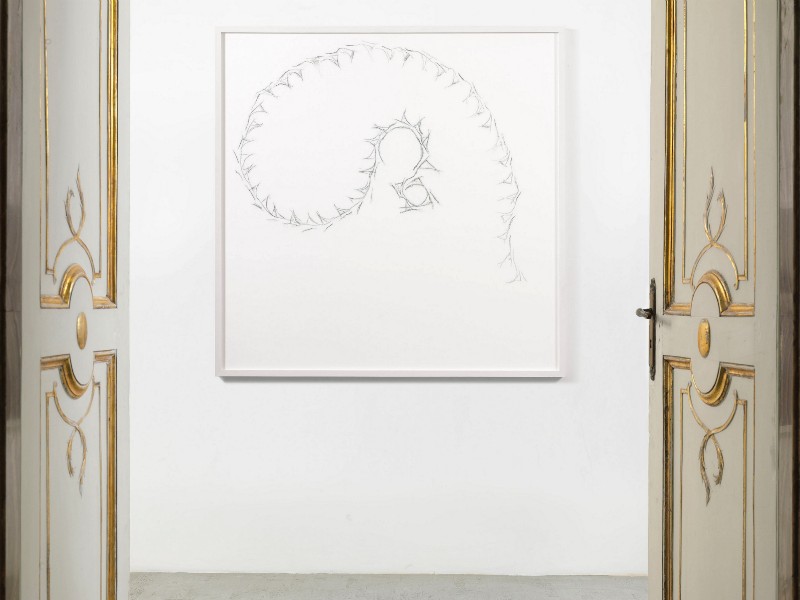 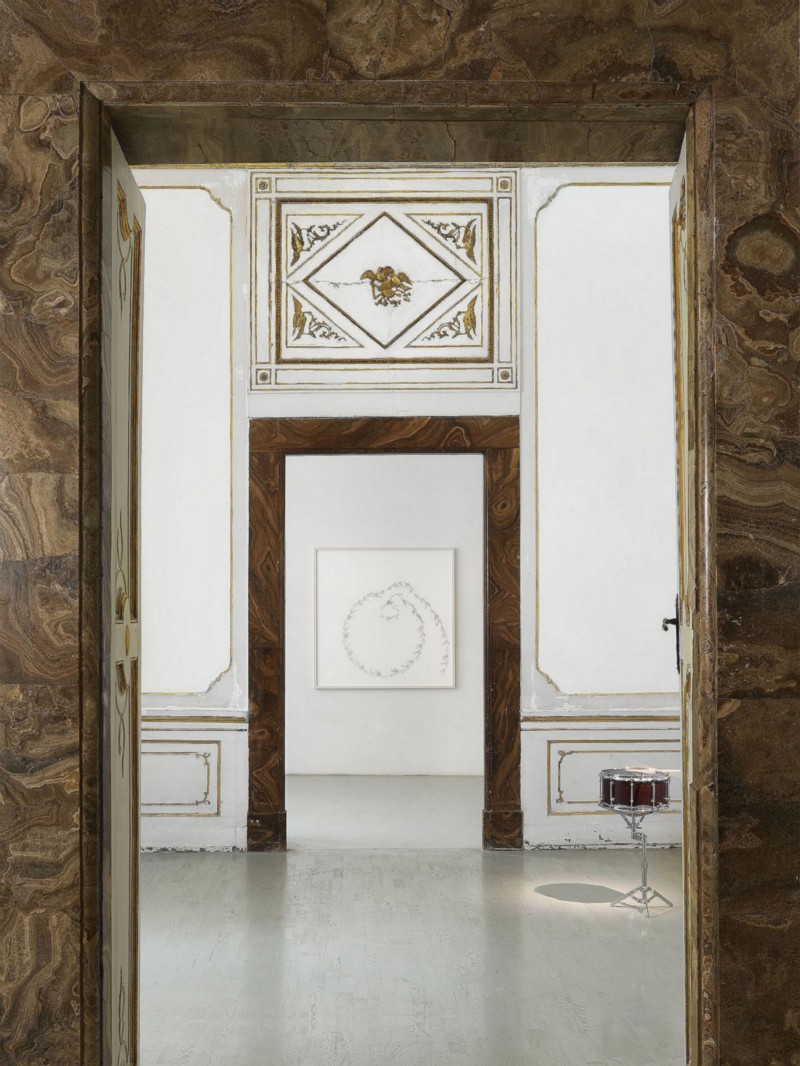 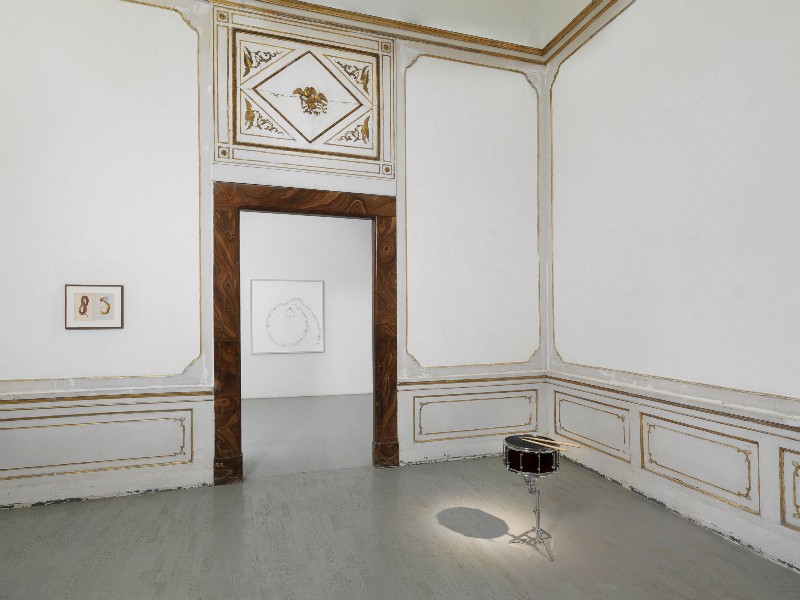 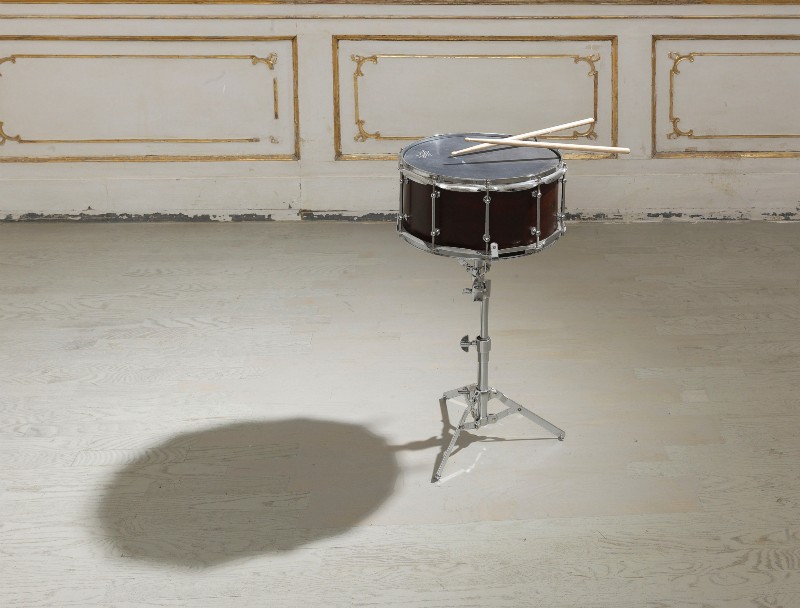 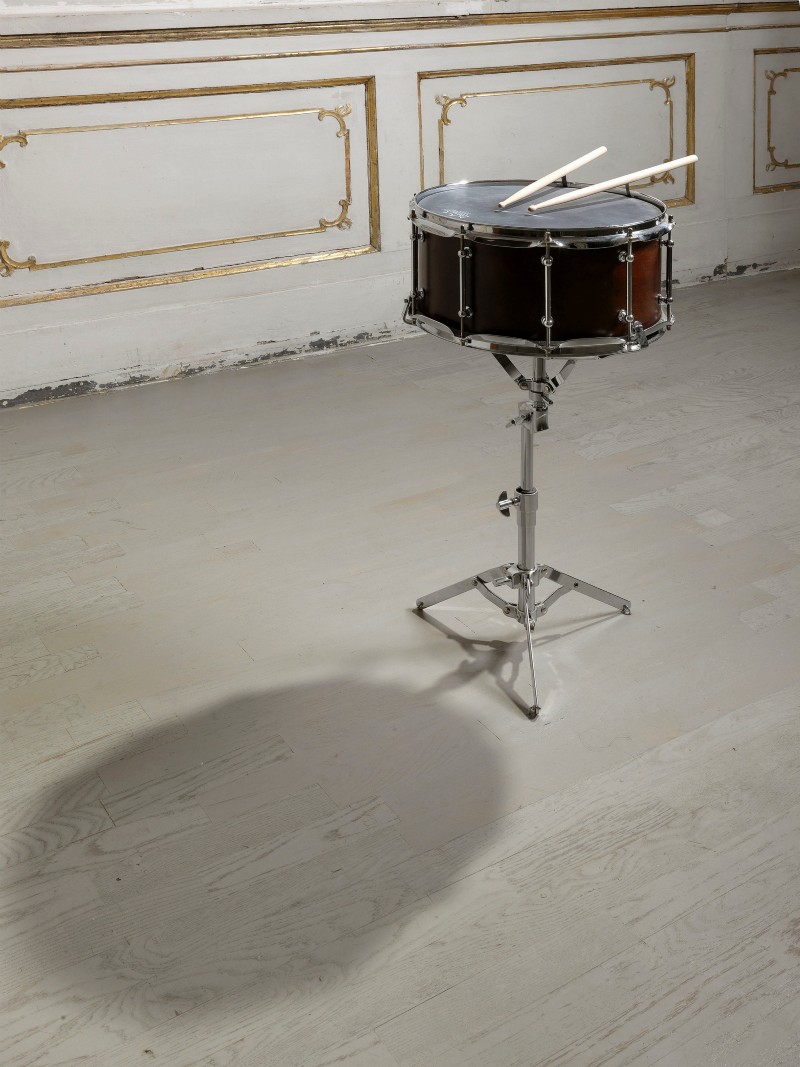 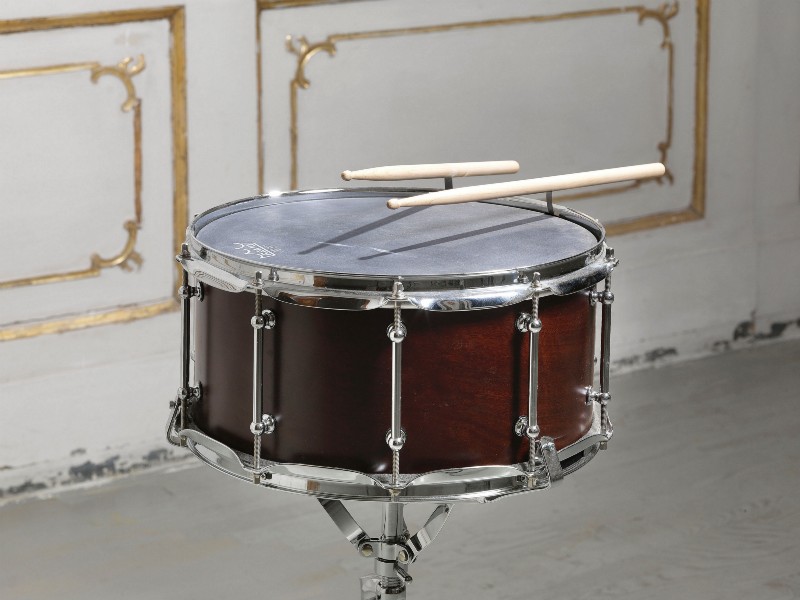 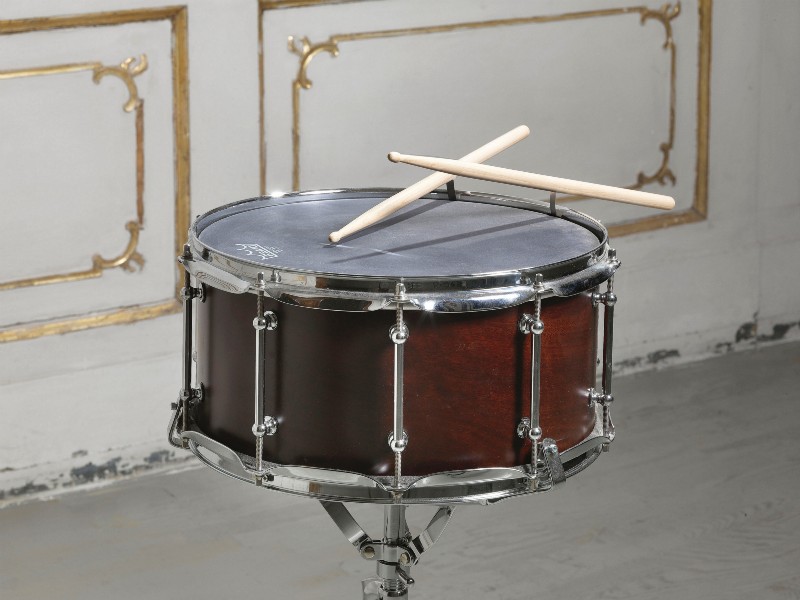 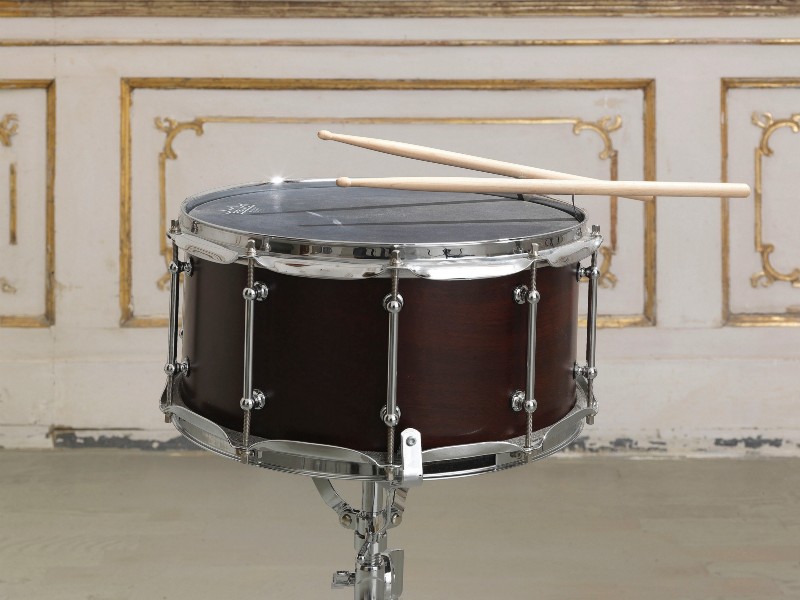 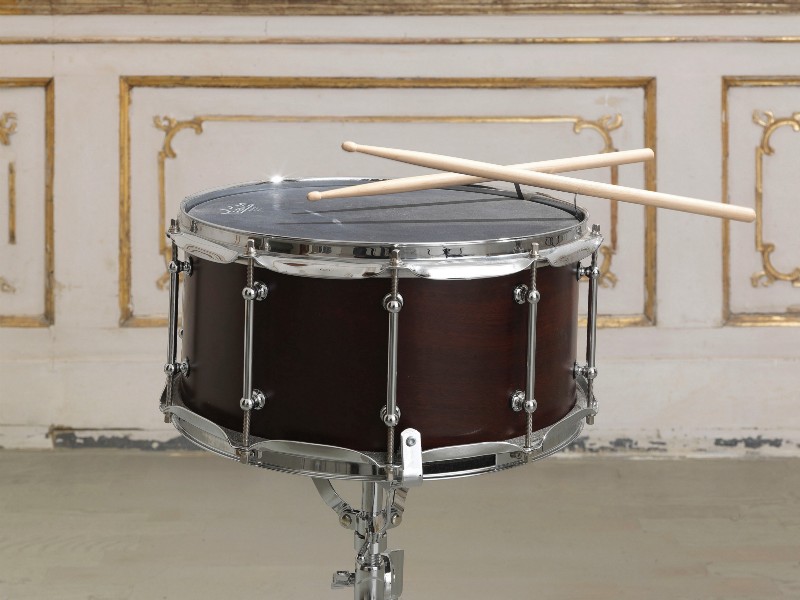 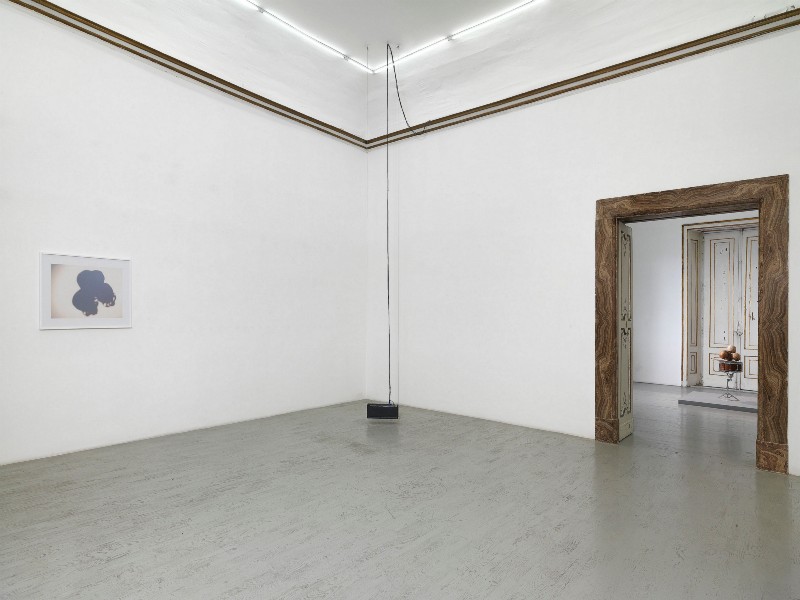 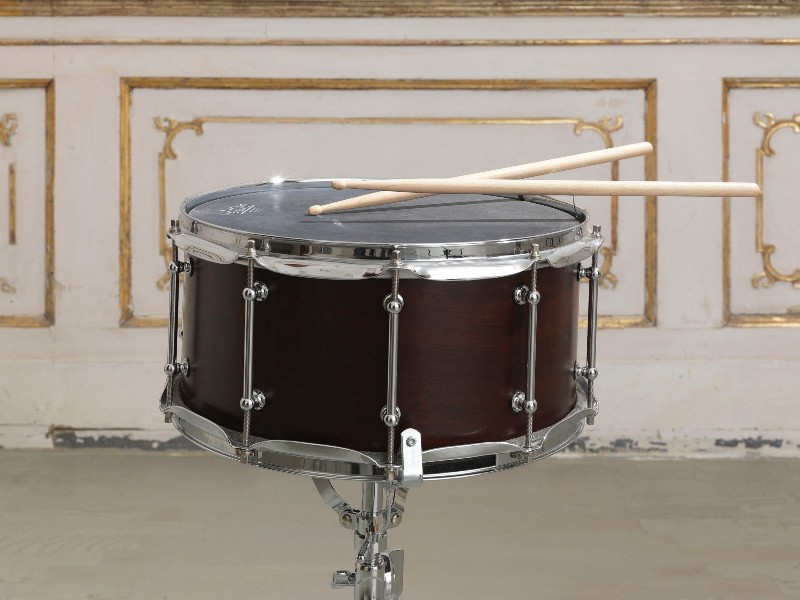 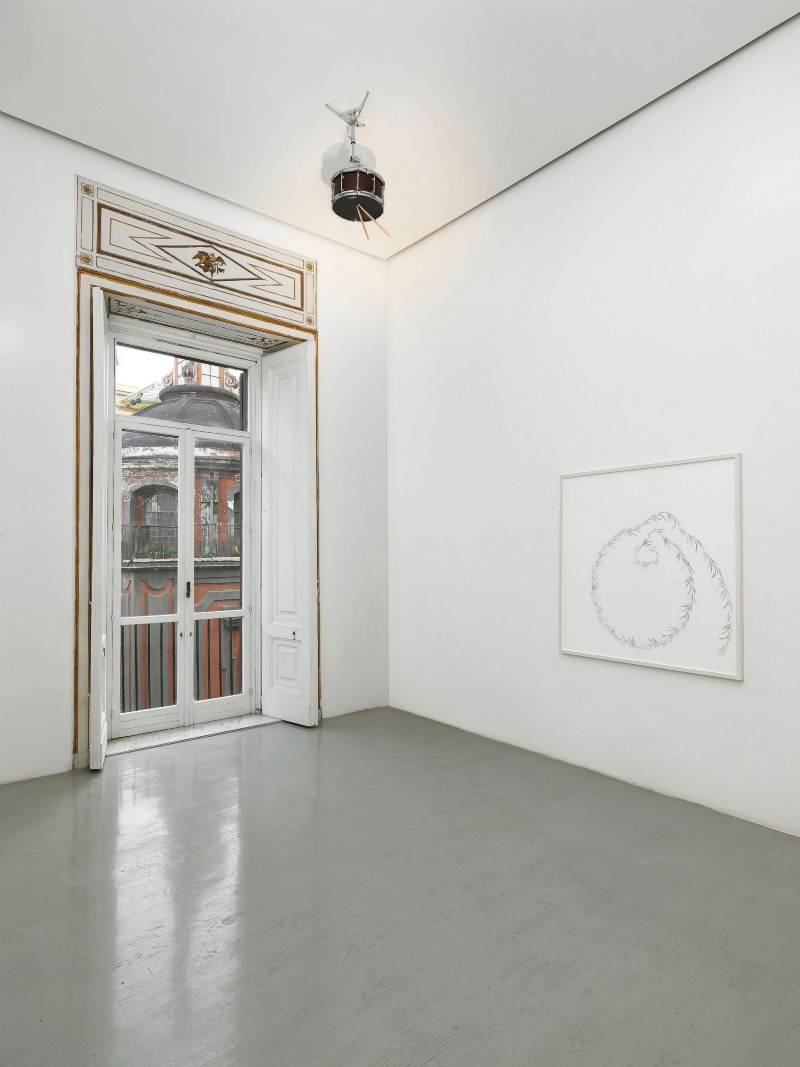 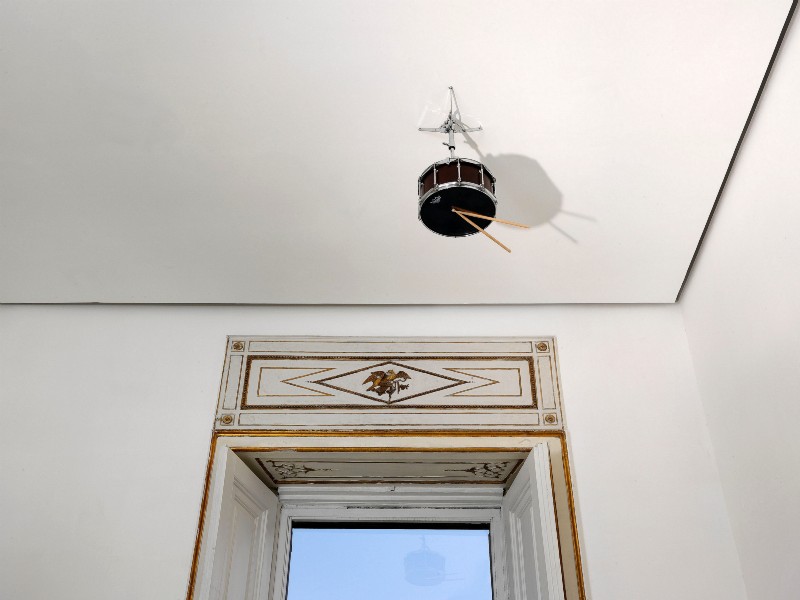 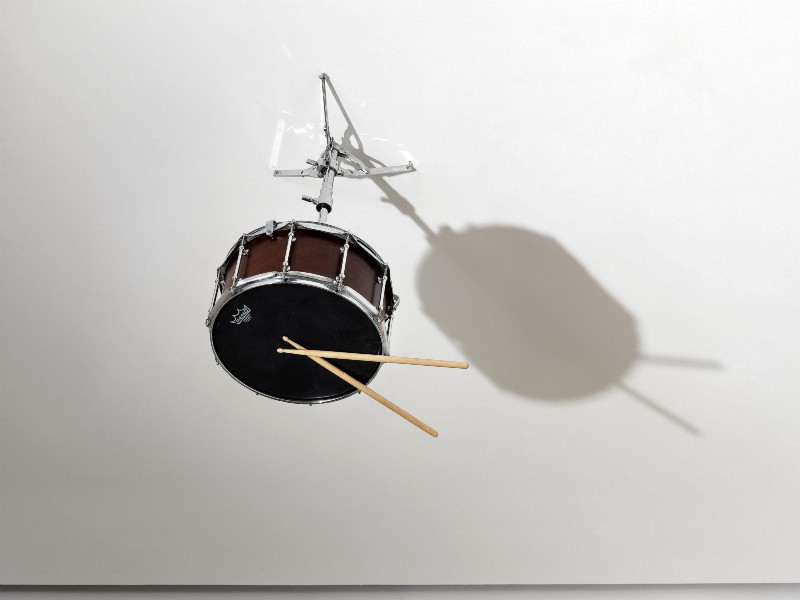 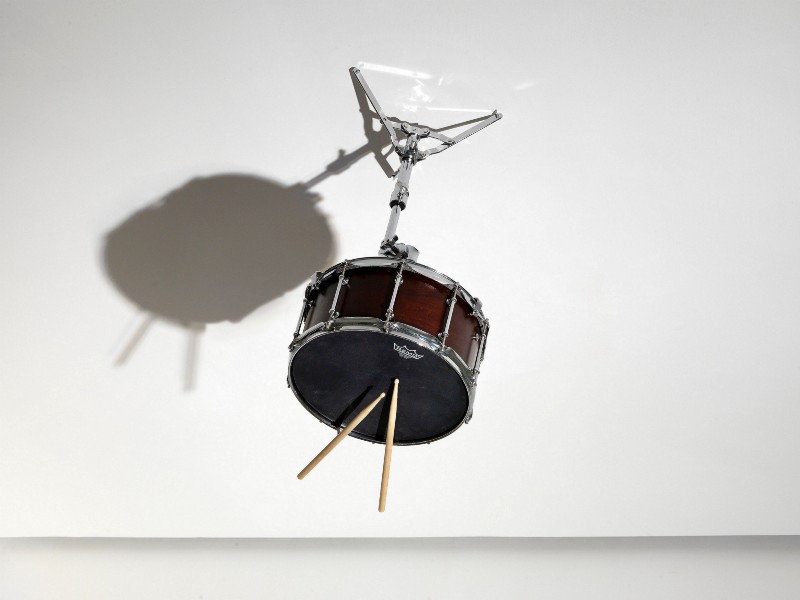 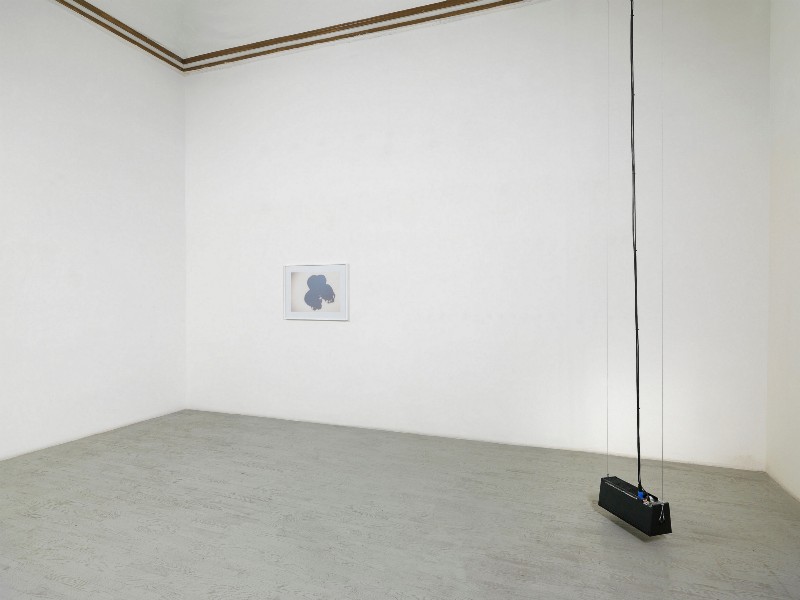 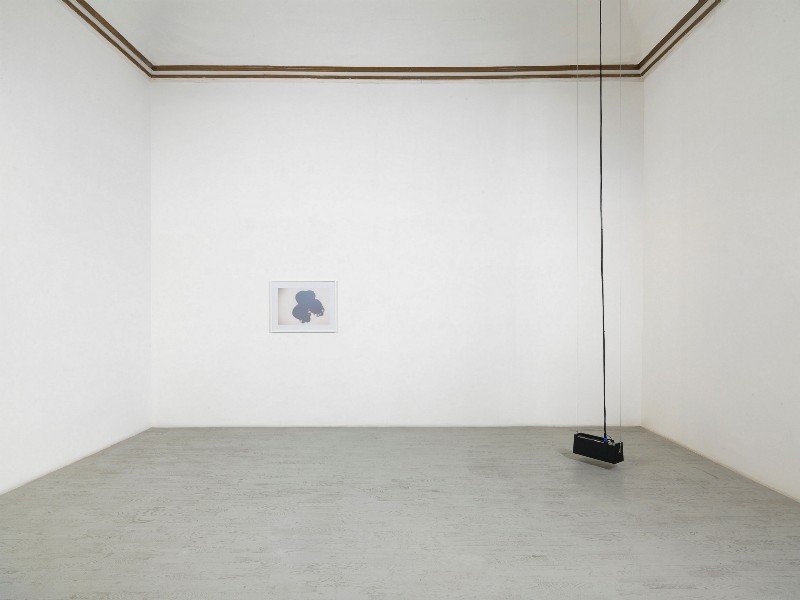 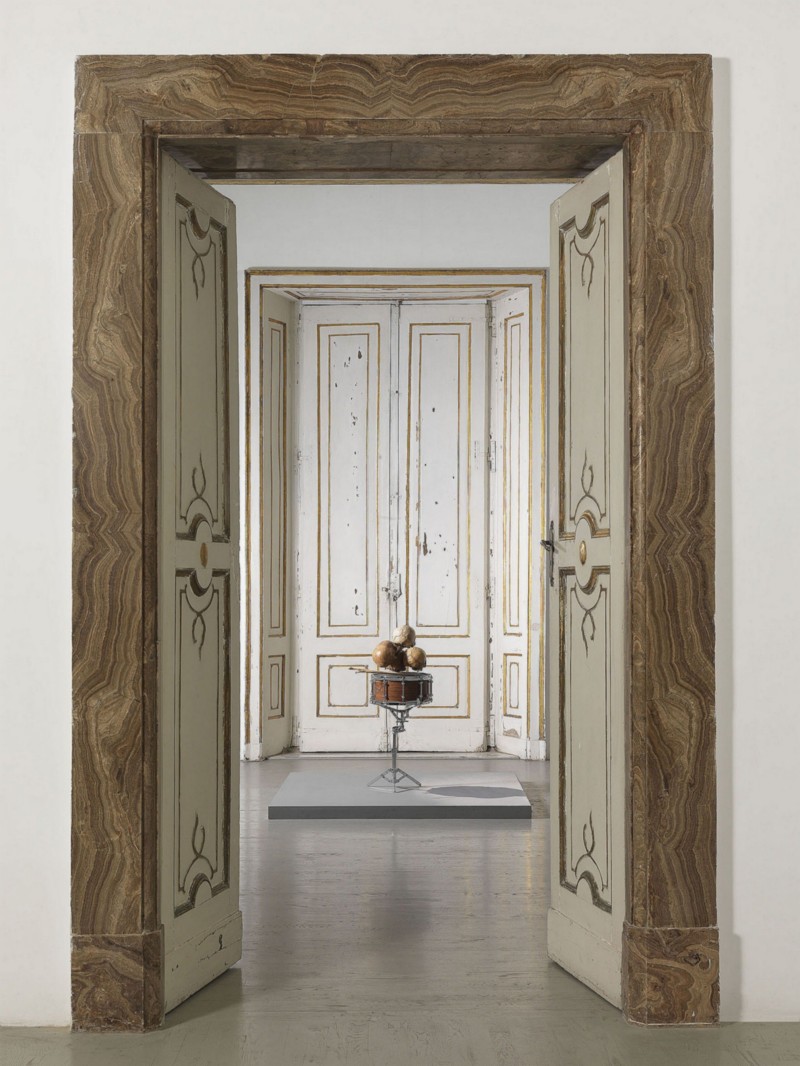 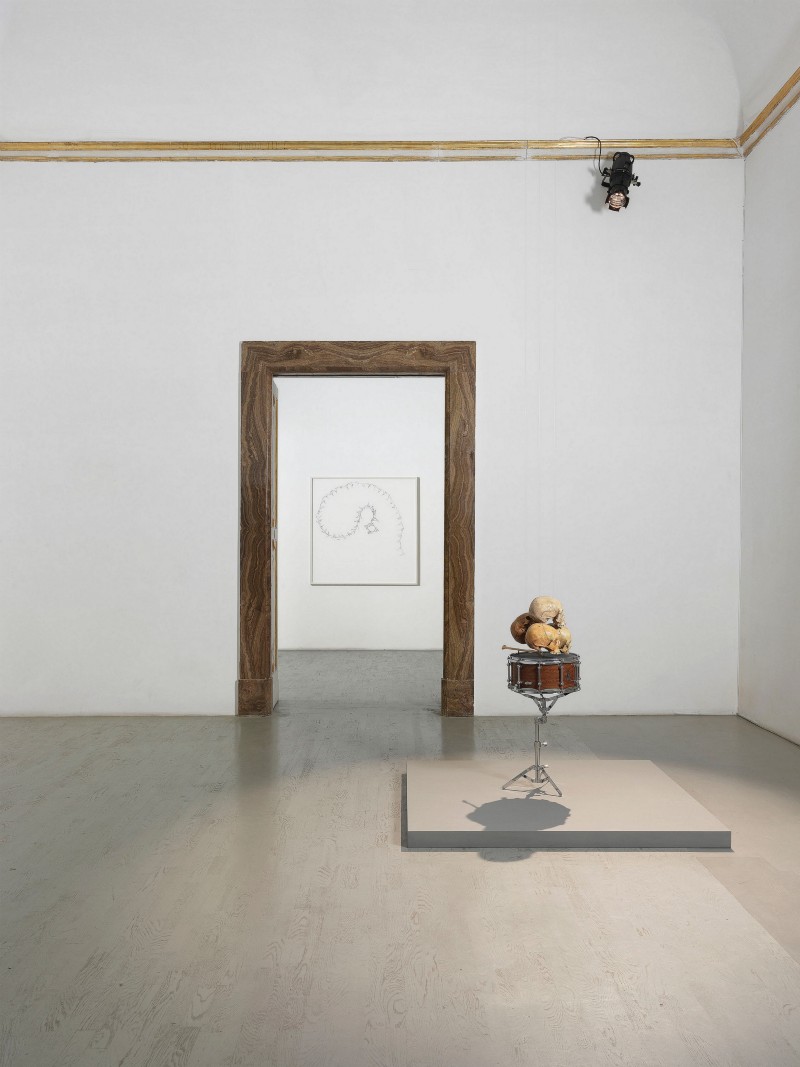 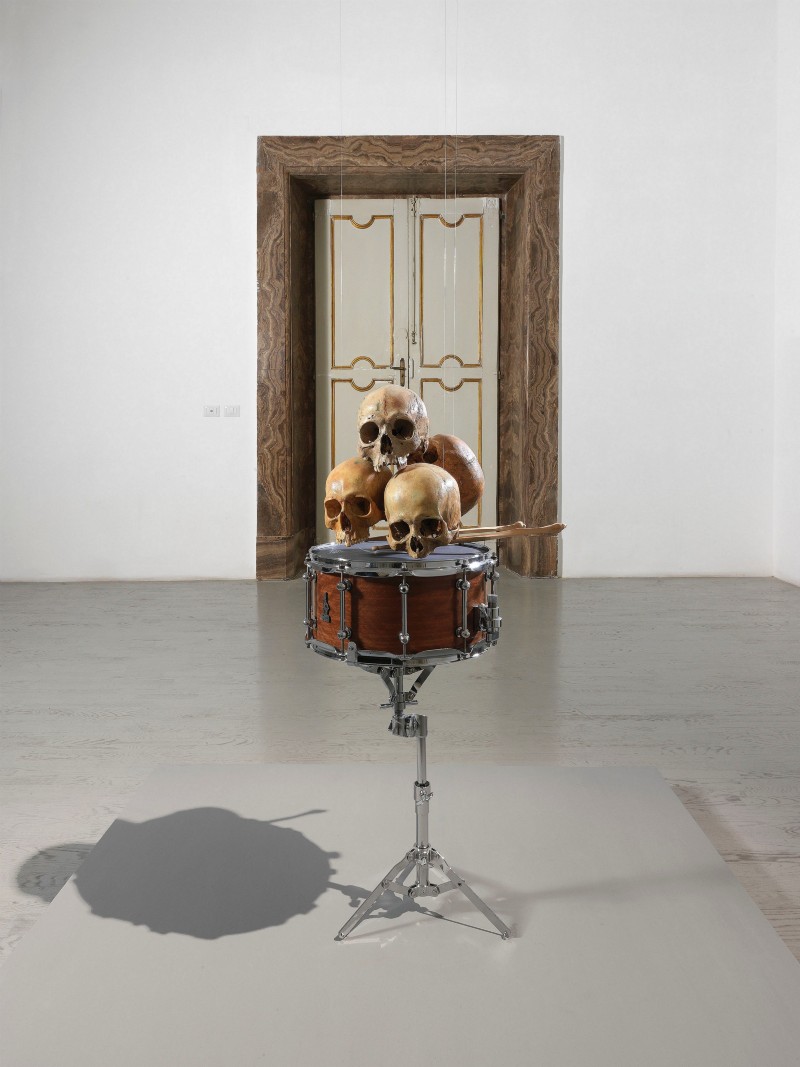 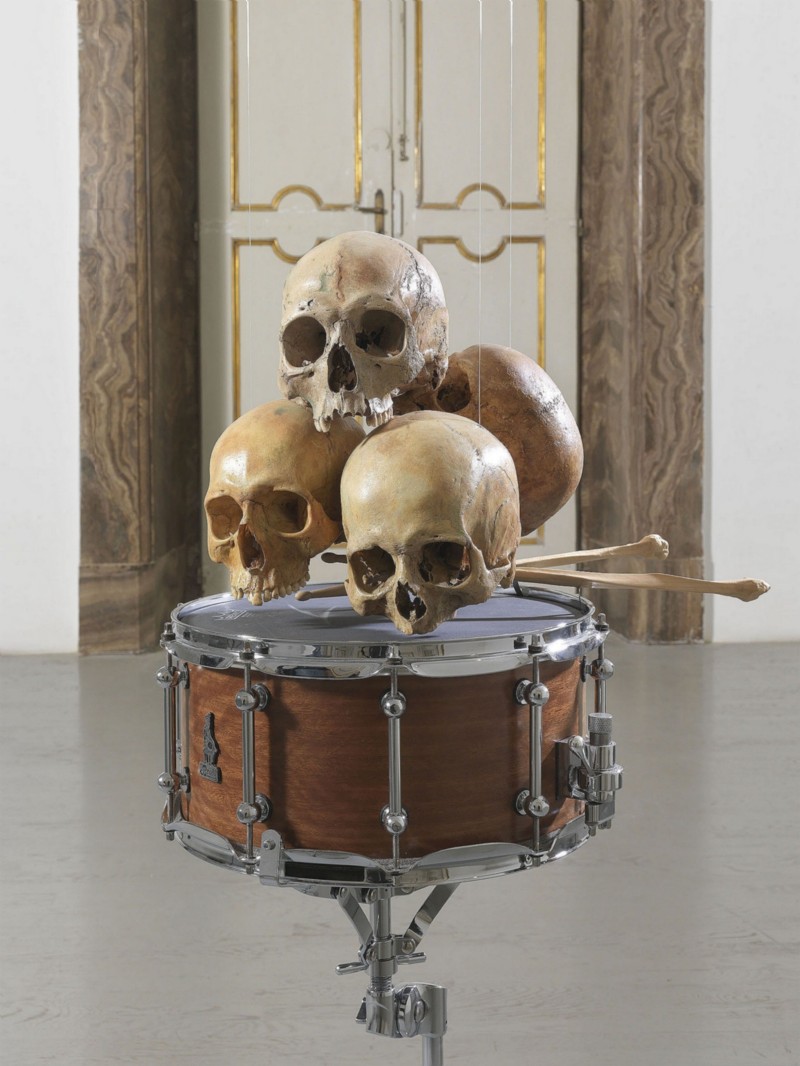 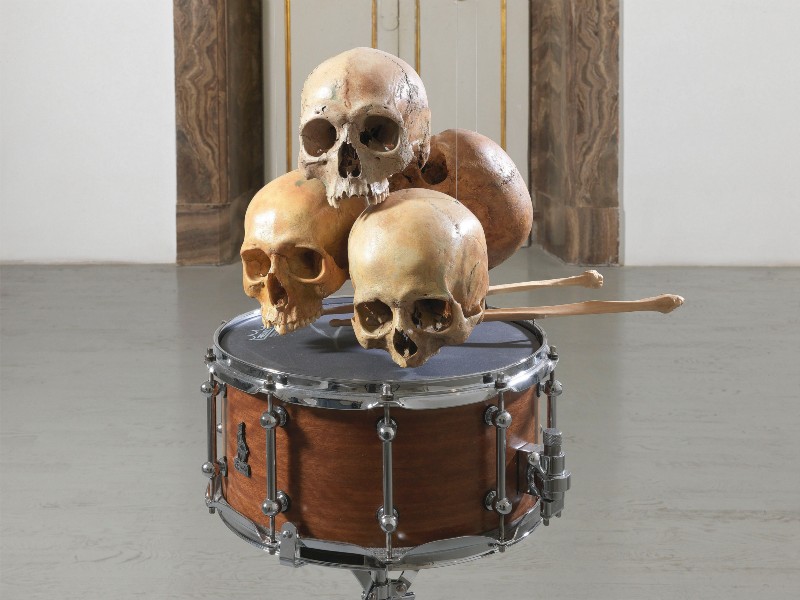 Alfonso Artiaco gallery is pleased to announce the opening of the solo exhibition by Anri Sala, on Friday, December 18th, 2015 at 7 pm, in the artist's presence.

Sound and music have always played an important role in the work of Anri Sala. In his current show at Alfonso Artiaco Gallery they form a leitmotif that accompanies the visitor throughout the show.

The show opens with No Window No Cry (Luigi Cosenza, Fabbrica Olivetti, Pozzuoli) [2015], an installation consisting of a music box set in a window from the Olivetti Factory in Pozzuoli. The music box welcomes the viewer to play the tune of The Clash's 1981 "Should I Stay or Should I Go". This sculptural piece alludes to the soundtrack of Sala's film Le Clash [2010], likewise questioning the boundaries between on-screen fiction and off-screen reality.

In a subsequent room the visitor encounters yet another sculpture: a "sound object" in the appearance of a snare drum playing to a still life, hanging upon it. The visual premise for and structure of the arrangement of the four suspended human skulls in Still life in the Doldrums (Don't Explain) [2015] come from Paul Cézanne's Pyramid of Skulls. The art historian Françoise Cachin describes Cézanne's 1901 drawing as "displaying an assertiveness very much at odds with the usual reserve of domestic still life tableaux". The skulls in Sala's piece have been arranged in the same configuration as the painting, and then hand-painted to replicate some of Cézanne's original oil gestures. They are played by drumsticks that have been carved in a way to resemble human fibulas on one end and drumstick heads on the other. They are balanced in such a manner that at certain, more vigorous points of the piece they play both the drum and the under side of the skulls. As with all of Sala's Doldrums, the drumsticks here are only triggered by and respond to an acoustic action that makes the drum-skin vibrate; there is absolutely no mechanic element in them.

This work has an audible soundtrack as well as a low frequency line that Sala has constructed for the drumsticks to respond to in tandem. The audible soundtrack combines short sections of the musical arrangements for early Tom & Jerry cartoons, composed by Scott Bradley (1940-1958), with short instrumental excerpts from the song "Don't Explain" by renowned jazz singer Billy Holiday (1946) as well as a cover version by Nina Simone (1964). Whereas the audience for the cartoon may be substantially different from the jazz audience, both compositions were contemporaneous to each other. Adding another layer, jazz emerged around the turn of the century coinciding with the execution of Pyramid of Skulls by Cézanne, yet another contemporaneous event contained within the work.

Continuing through the rooms of the gallery, the visitor encounters Moth in the Doldrums [2015], a work consisting of a pair of snare drums: one standing on the floor, the other suspended from the ceiling. The sound of the piece is based on Overtone Oscillations [2015], a performance that the artist presented earlier this year at the Barbican in London. In that work, Sala merges two globally celebrated melodies – "The Internationale", otherwise known as the workers' anthem and "La Marseillaise", the renowned French anthem. Before Pierre Degeyter set "The Internationale" in 1888 to the music it currently uses, for seventeen years the lyrics were sung to the melody of "La Marseillaise", which explains their affinity. The vocal merging of both songs was made possible by an overtone singer's capacity to sing two tones at once. In Sala's Moth in the Doldrums the voice of the singer splits in two parts – overtones and fundamentals – each played by its corresponding drum. The suspended drum plays back the overtones, while its drumsticks respond to the low frequencies of the fundamentals. The concealed speaker inside the standing drum plays back the fundamentals, whilst its drumsticks' rat-tat-tat is triggered by the overtones. Thus the tightly woven structure that the singer created within its voice is now split within the pair of the drums, leaving the visitor to oscillate between the two.

Works on paper are shown alongside the gallery walls, in the intervals between the aforementioned sound-based sculptures:

Lines recto verso (Jung, Huxley, Stravinsky) [2015] and Lines recto verso (Afif, Sala, Flavien) [2015] consist of repetitions of three different individual's palm lines. Two premises are particularly important to Sala here: that each of the groups was one another's contemporaries and that he works only with their left hands (a clear nod to Ravel Ravel [2013] where two different interpretations of Ravel's "Left Hand Concerto for Piano and Orchestra" are heard alongside one another).

Technically, first the back of the drawing is executed, taking in account the half-transparency of the paper. After that the front side is added, giving the drawing a fresco-like aspect, where the colors seem to surge from within the surface.
Lines recto verso (Jung, Huxley, Stravinsky) is made from the palm lines of Carl Gustav Jung, Igor Stravinsky and Aldous Huxley: while Stravinsky was a close friend of Huxley and dedicated his last orchestral composition to him, Huxley and Jung both analysed the notion of the unconscious in two distinct ways. Lines recto verso (Afif, Sala, Flavien) is made from Sala's own palm lines as well as those of two other artists, Saâdane Afif and Jean-Pascal Flavien, who are all close friends and also live in Berlin.
In Sala's own words: Untiled (Boa Antarctica/Italia) [2015] is a new addition to a series of drawings that Sala initiated in 2014, titled Untitled (map/species). In this series Sala reworks maps of countries and geopolitical territories through manual manipulation, skewing and warping representations of land mass so that they fit within the boundaries of the found etchings of biological species with which they are exhibited. As the notion of the frame helped classify and simultaneously seek to constrain their subjects in etchings of the XVIII century, the margins of Sala's map/species series restrict the geographical representations that they house.

Untitled (d'aprčs Cézanne) [2015] is a photograph depicting the shadow of what one can identify as a group of skulls floating against a bright background. The photographic work anticipates the later appearance of Still life in the Doldrums (Don't Explain) in the exhibition space, thus projecting its presence in separate rooms.

As visitors walk through the exhibition, they will encounter resonances and reverberations within and between works. Along this line, simultaneous to the exhibition, another No Window No Cry is installed in the Olivetti building, returning it to its original context. Other possible pairings include Still life in the Doldrums (Don't Explain) and Untitled (d'aprčs Cézanne), Lines recto verso (Jung, Huxley, Stravinsky) and Lines recto verso (Afif, Sala, Flavien); the pairing can even be within the work itself such as Moth in the Doldrums and Untitled (Boa Antarctica/Italia). When put in dialogue, in the form of equal or distinct pairs, these works create a deeper resonance picking new ideas and echoing other themes.