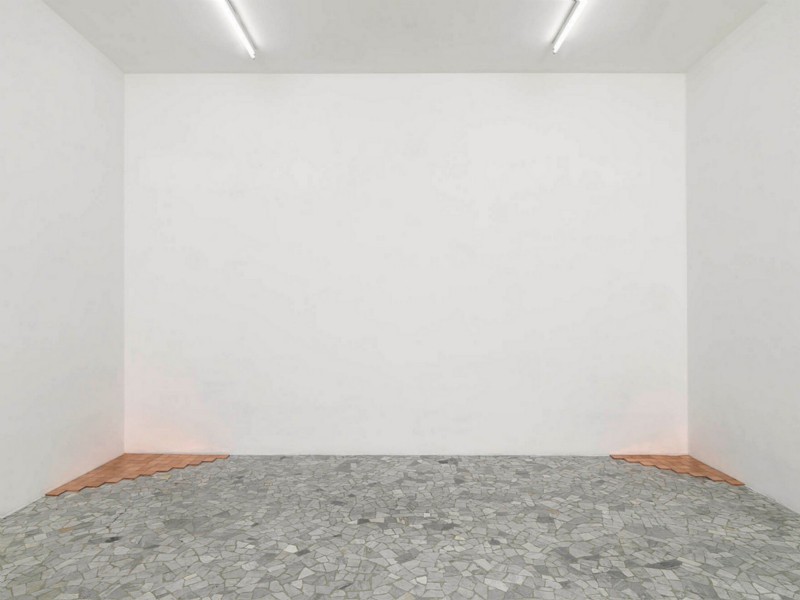 Carl Andre comes back to Alfonso Artiaco after his previous exhibitions in 1995, 1998, 2006 and his important contribution to Dedica 1986-2006 Vent'anni della Galleria Alfonso Artiaco at Pan in Naples. For the gallery space in Piazza dei Martiri the artist realizes site-specific pieces with materials like copper and iron. Copper is a material loved by Andre for its brightness and its ability to reflect the light while the second, iron, more opaque has been adopted by the artist more often in the last period. The works consist of hundreds of small, thin and identical slabs (1 x 10 x 10 cm) arranged on the gallery floor in geometric patterns.

Carl Andre [1935, Quincy (MA)], considered one of the five main artists of Minimal Art, began his work as a sculptor in the Sixties, with a deep interest in the tradition of sculpture itself and closely following the artistic productions of Constantin Brancusi and Frank Stella, with whom he shared the studio in New York for some time.

The use of prefabricated materials, the arrangement for simple juxtaposition of single identical elements within each work and the limitation to elementary forms are the principles that characterized the work of the American artist in the Sixties which continue to be valid also for current works.

With the presentation of the work "Lever" in 1966 at the exhibition "Primary Structures", his speech in the same year at the Tibor de Nagy Gallery and the first solo show in Europe at Konrad Fischer Gallery (Düsseldorf) in 1967, Andre defines an unequivocal relationship between his sculptures and the floor, matter of fact, his materials were spread on the floor taking possession of the exhibition space.

The dictates of modern sculpture considered essential until that moment are questioned: the sculpture lose the volume; the materials are not finished with welding and chiseling, they become pure mass, highlighting their specificity and their physical properties of color, ability to reflect light, consistency and weight, and above all without symbolic or expressionist references.

With the volume's abandonment and the importance of the identity of the single units constituting the work, Andre overcomes, also, the hierarchical problem of vision. There is no beginning yet no end, no direction is privileged, everything is equally important: sculpture becomes "place".