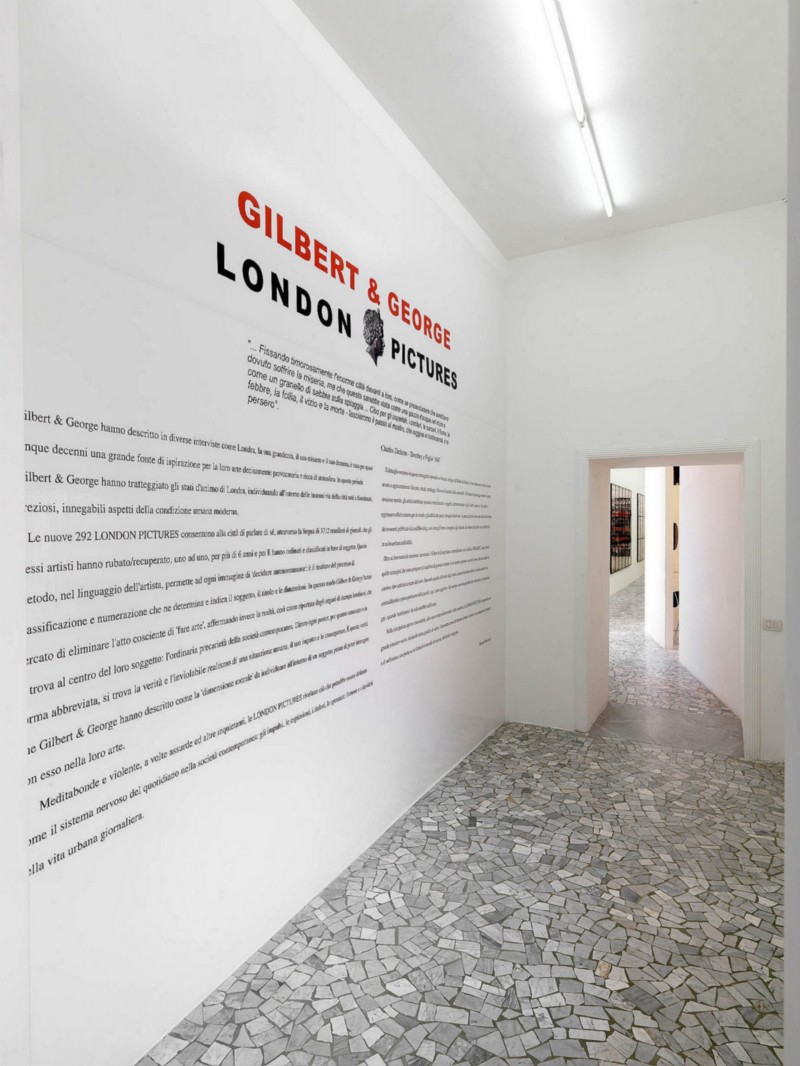 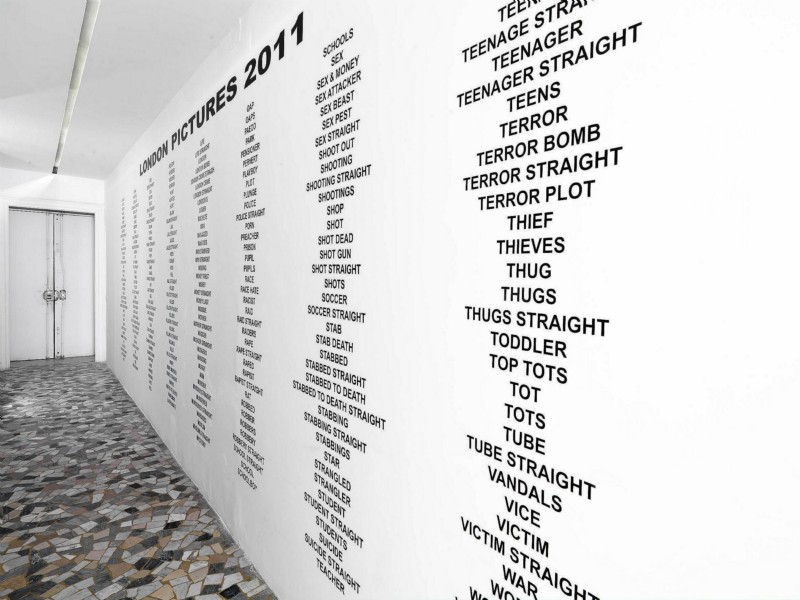 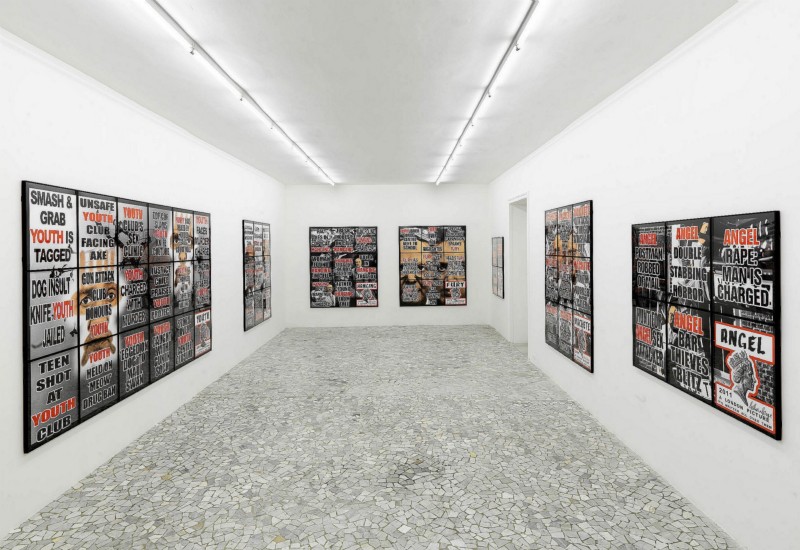 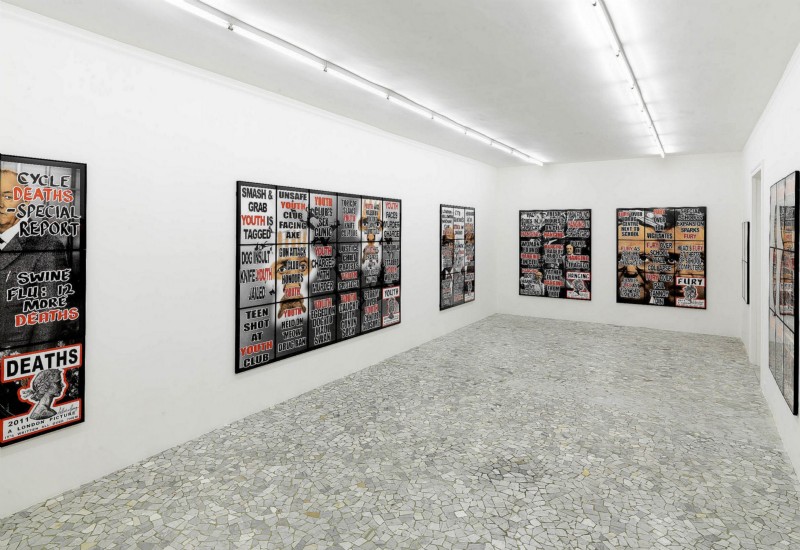 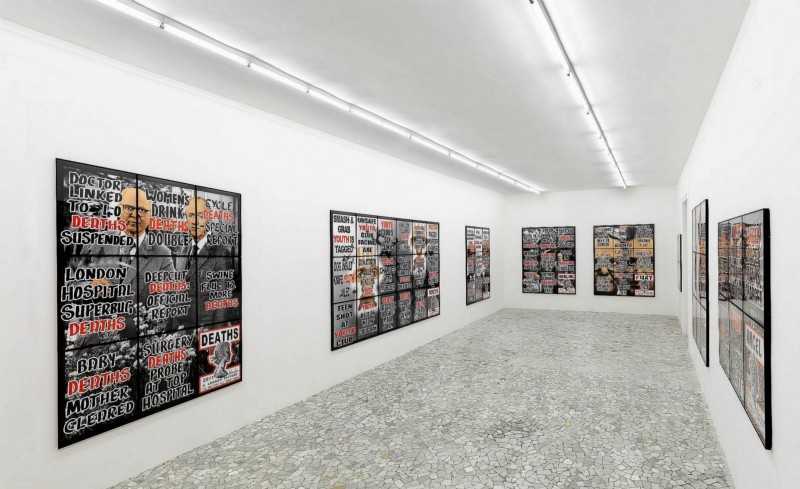 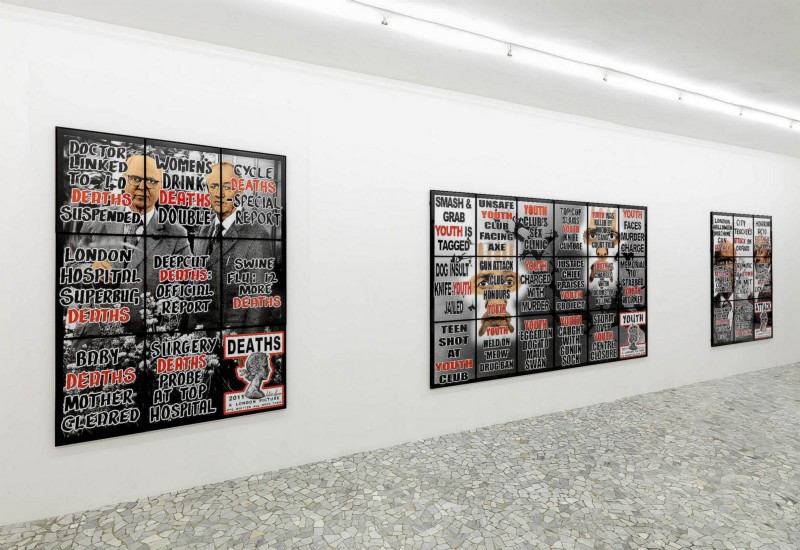 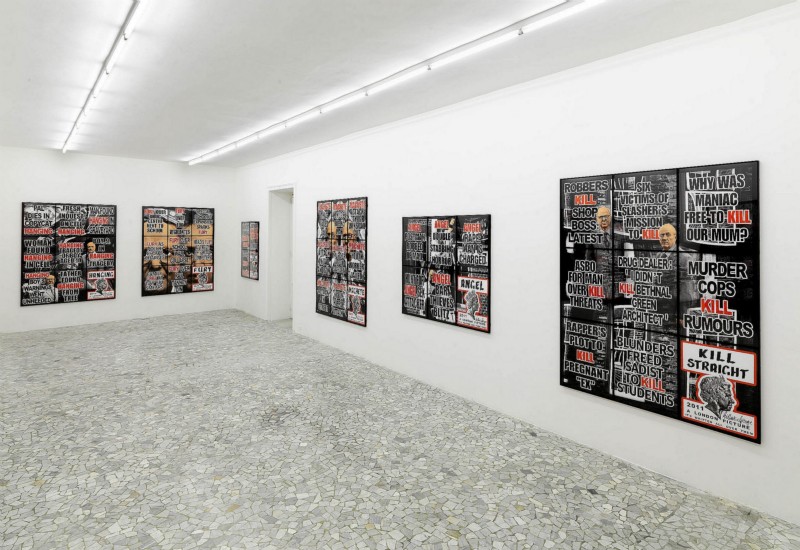 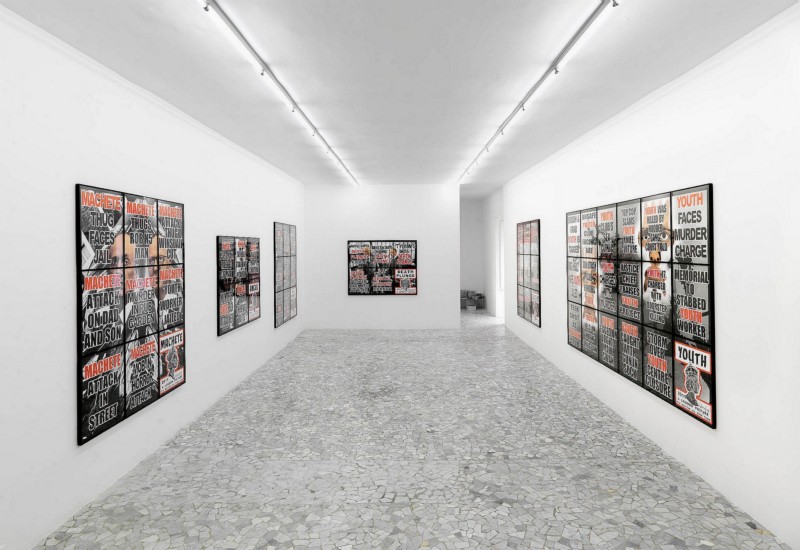 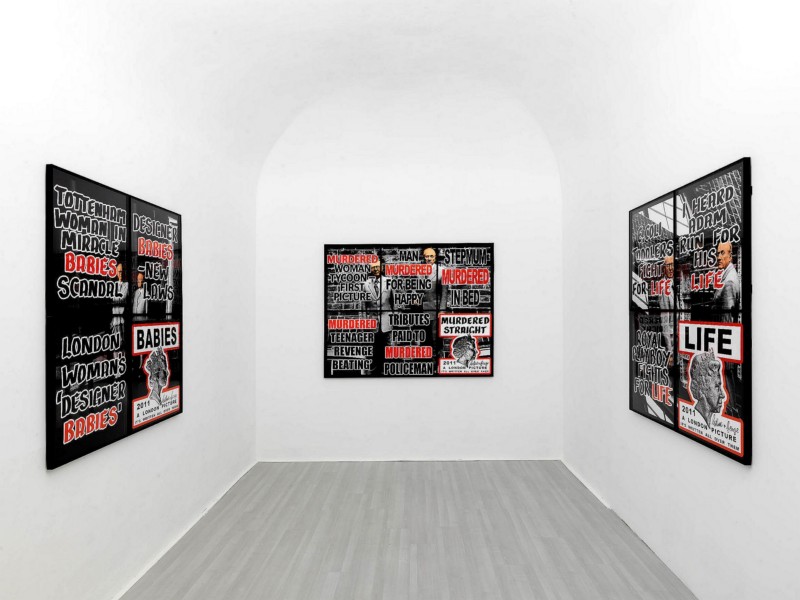 Alfonso Artiaco gallery is pleased to announce the opening of Gilbert & George's solo show, on Thursday the 24th of May at 7.00pm,
the artists will be present.

For the new exhibition by Gilbert & George at Alfonso Artiaco gallery, 13 works will be shown from the new LONDON PICTURES series, the largest one yet created by the British artists.

'Gilbert & George have described in several interviews how London, its grandeur, mystery and drama has been a major inspiration of their determinedly confrontational and richly atmospheric art for nearly five decades. Over this period, Gilbert & George have shadowed London's moods, identifying within the city's sleepless thoroughfares all of the messy, precious, undeniable aspects of the modern human condition.
These 292 new LONDON PICTURES enable the city to speak for itself, in the language of 3712 newspaper posters, stolen/retrieved, one by one by the artists themselves for more than 6 years, and then sorted and classified by them according to subject. This method, in the words of the artist, allows each picture to 'decide itself' – its subject, title and size determined and denoted alphabetically and numerically by the findings of the classification process. In this, Gilbert & George have sought to eliminate the conscious act of 'art-making', asserting instead the reality, as reported by the print news media of London, that lies at the heart of their subject: the routine volatility of contemporary society. Behind each poster, however blunt or abbreviated, lies the truth and inviolable realism of a human situation, its impact and consequences. It is this truth that Gilbert & George have described as the 'moral dimension' that they must identify within a subject before they can engage with it within their art.
Brooding and violent, at times absurd and at others disquieting, the LONDON PICTURES reveal what might be termed the nervous system of quotidian contemporary society: the impulses, outbursts, sorrows, hopes, temper and desires of daily urban life.
The extraneous detail in these pictures is sparse and limited: the figures of Gilbert & George, their expressions at once stern or seemingly distracted; streets, net curtains, reflections in car windows. Within the townscape of this moral audit, the artists appear to pass like ghosts or seers, alternately watchful and inert, as though their spirits were haunting the very streets and buildings that these pictures describe. In this the artists have been inspired by their readings of Lord Dowding's published accounts, as delivered to him, he claimed, by the ghosts of killed R.A.F. pilots, of an induction into the afterlife.
In addition to their 'automatic' means of creation, Gilbert & George have distinguished by the suffix 'STRAIGHT', after the title, those pictures that are comprised of newspaper posters printed in a bold san serif typeface, rather than the more cursive, 'handwritten' typography of the remainder. This distinction, the artists have said, also highlights the divisive and irrelevant use of the word 'gay'– as a meaningful adjective. For example: one needs not to refer to 'gay marriage', when 'marriage' alone will suffice.
In their epic and relentless extent, simultaneously Dickensian and ultra-modern, the LONDON PICTURES comprise a great visual novel, revealing without judgment the ceaseless relay of urban drama, in all its gradations of hope and suffering, a doorway into an amazing world of misery, unhappiness and shame' (Michael Bracewell)

A catalogue documenting all 292 of the 'LONDON PICTURES' with an essay by Michael Bracewell will be published by Hurtwood Press to accompany the exhibition.