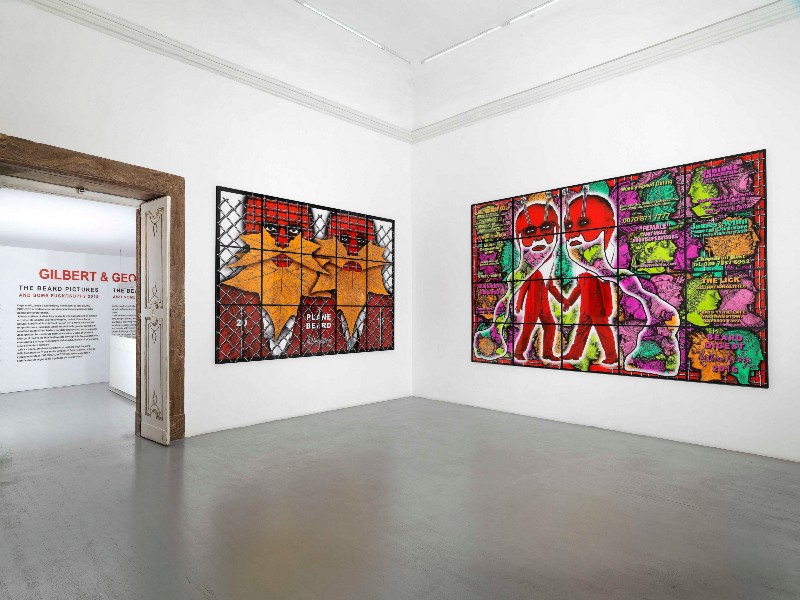 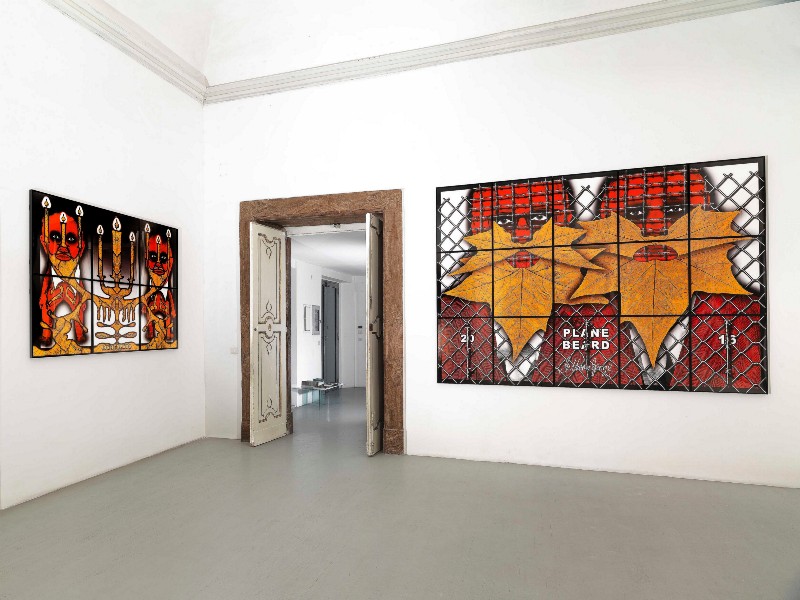 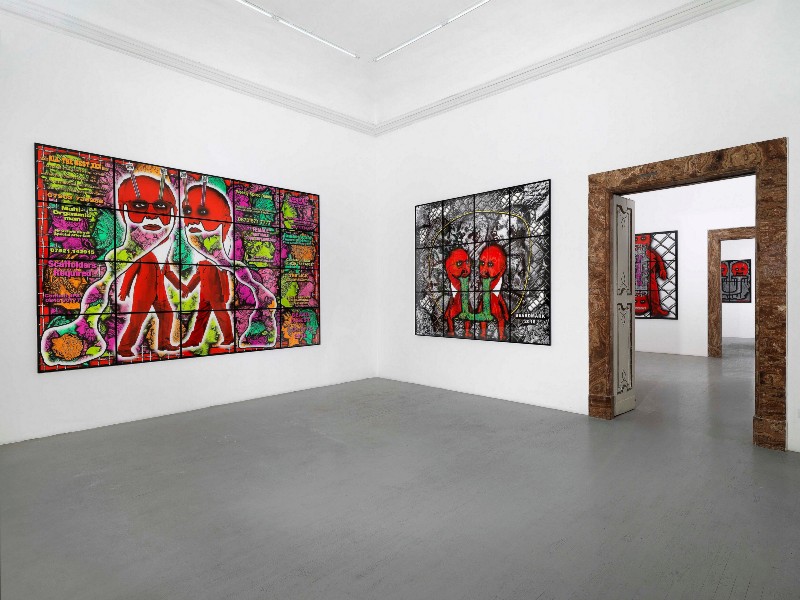 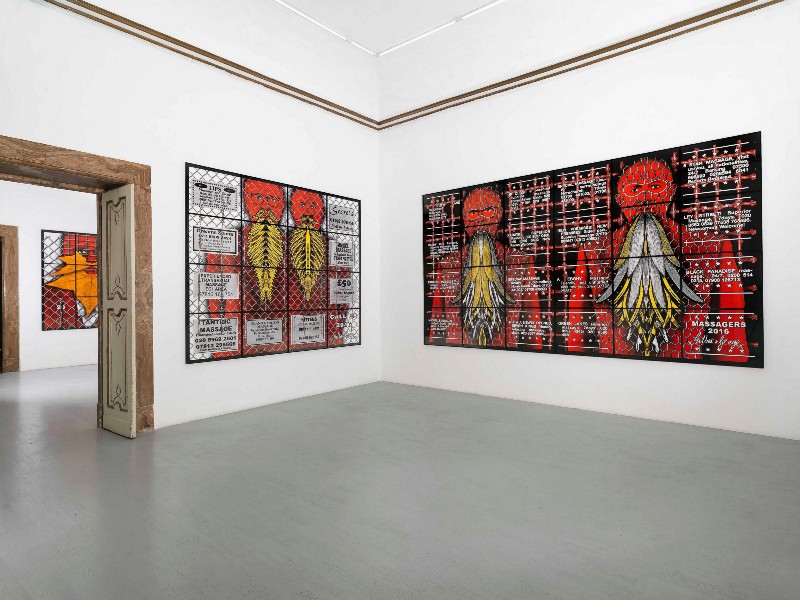 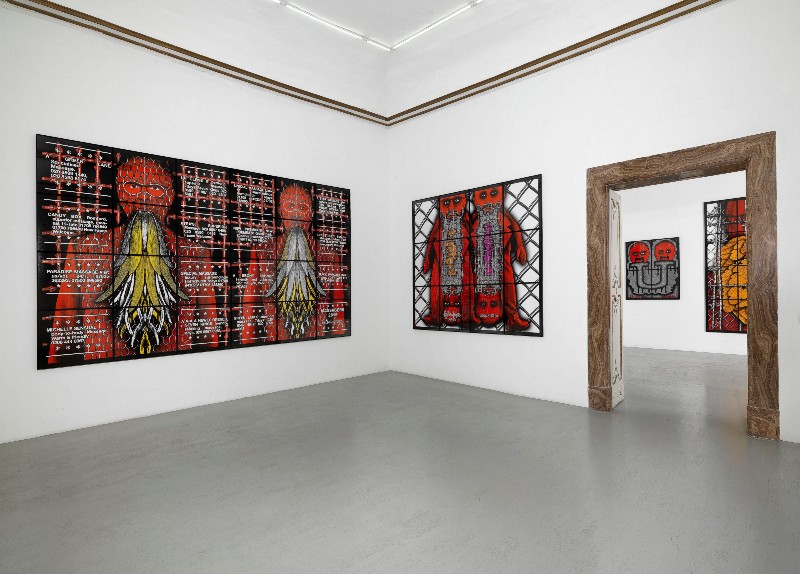 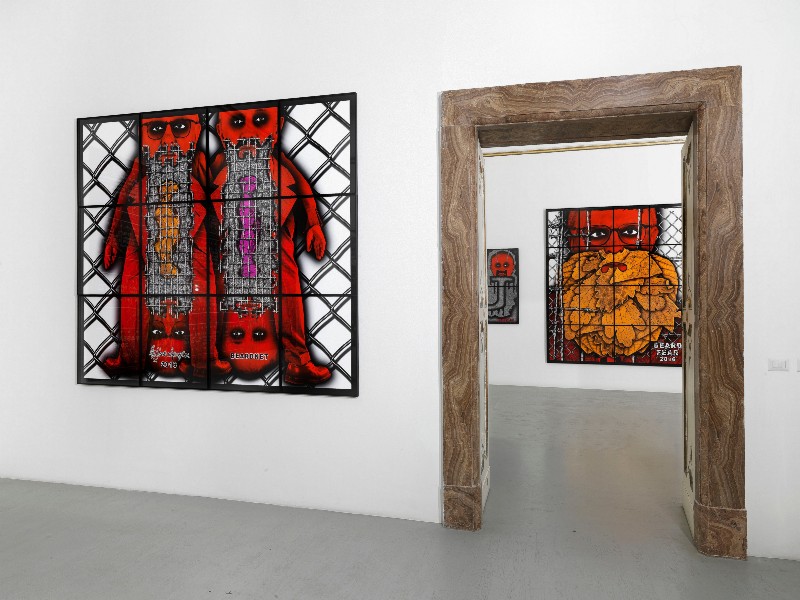 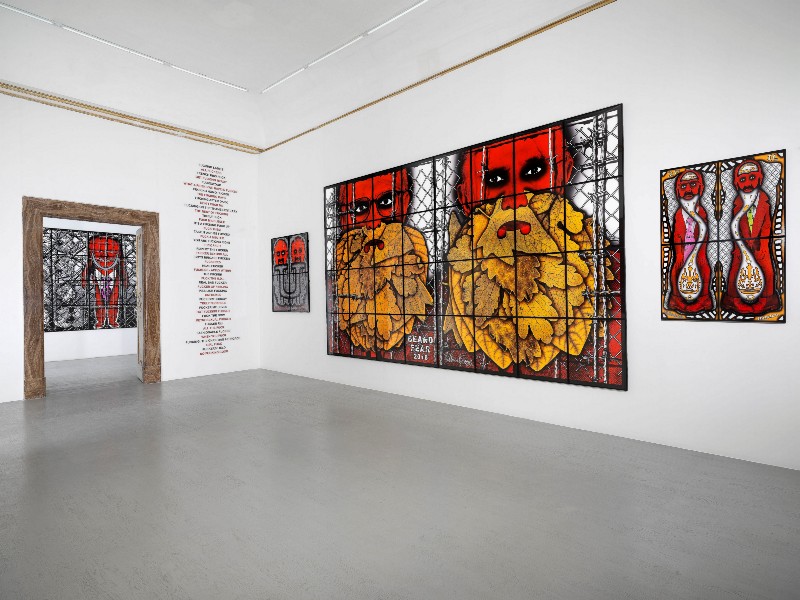 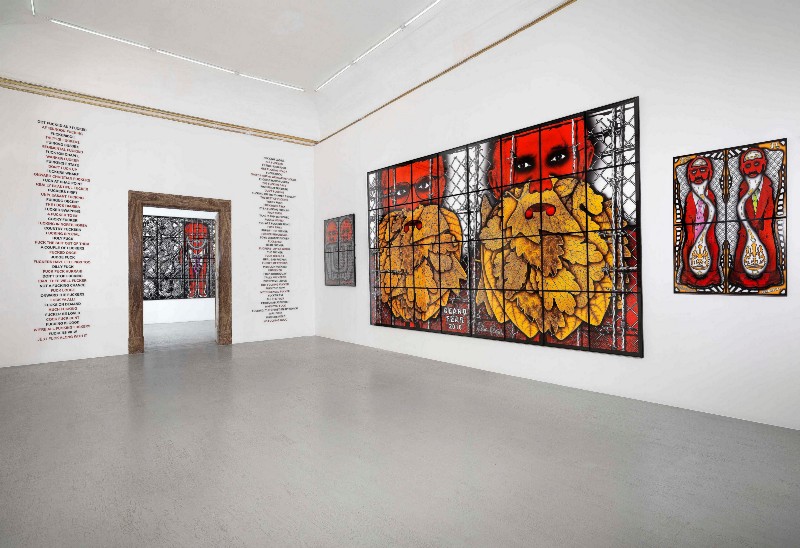 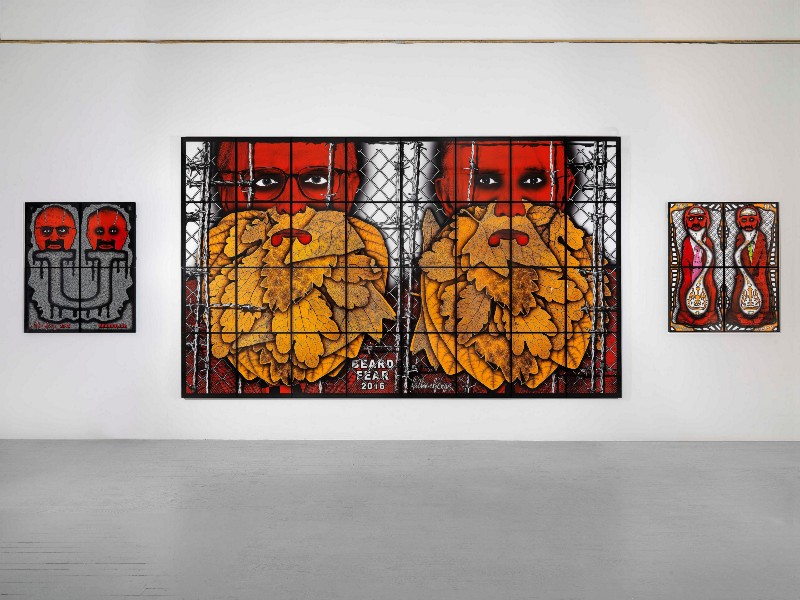 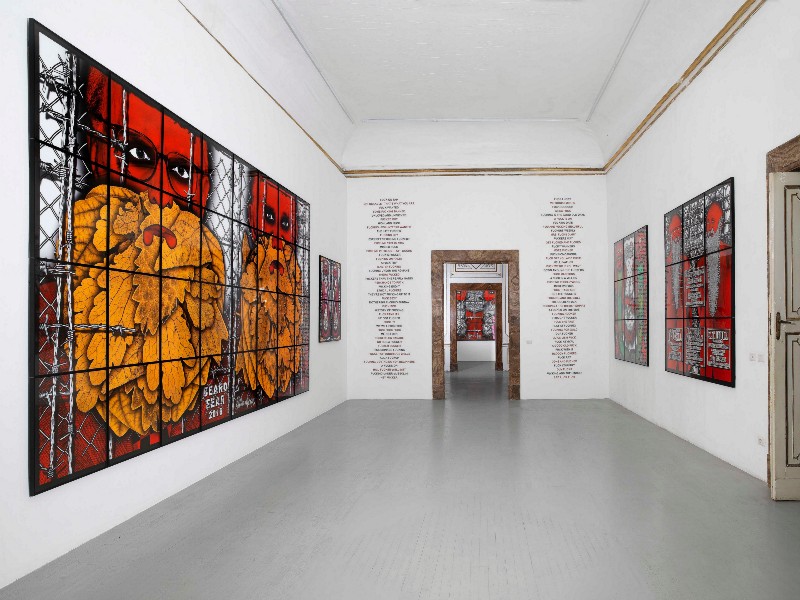 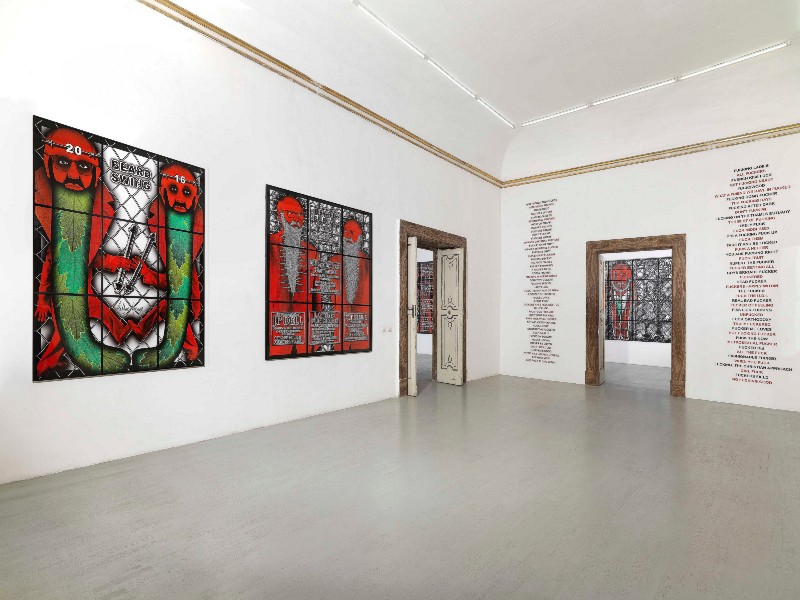 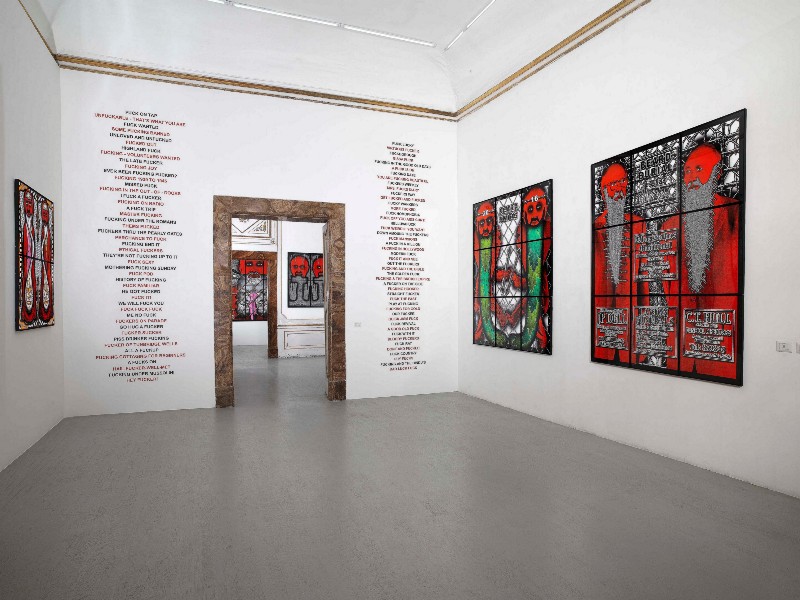 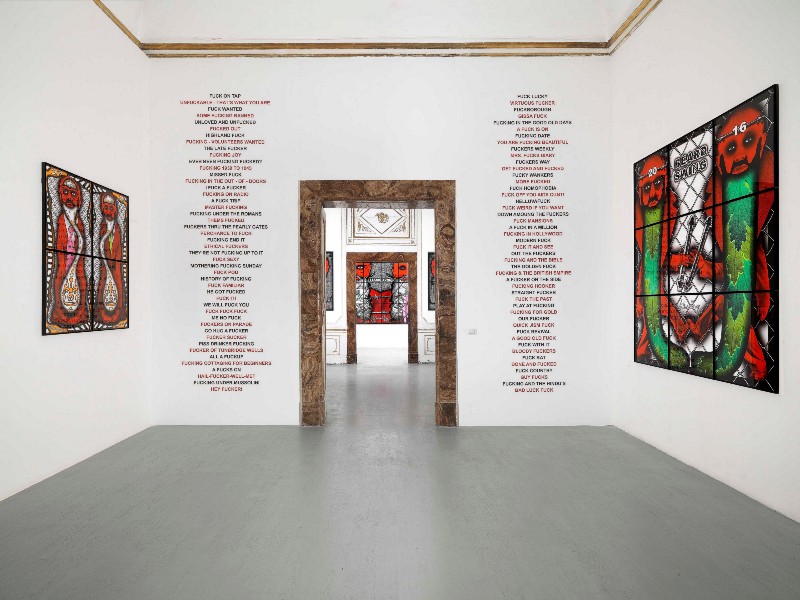 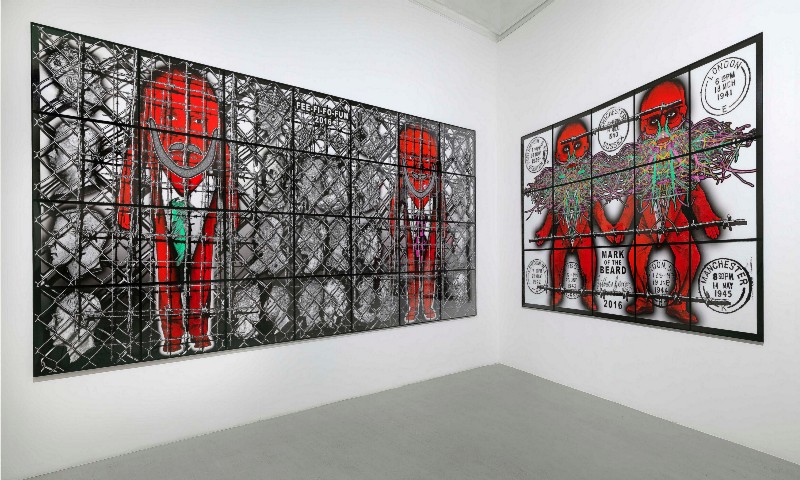 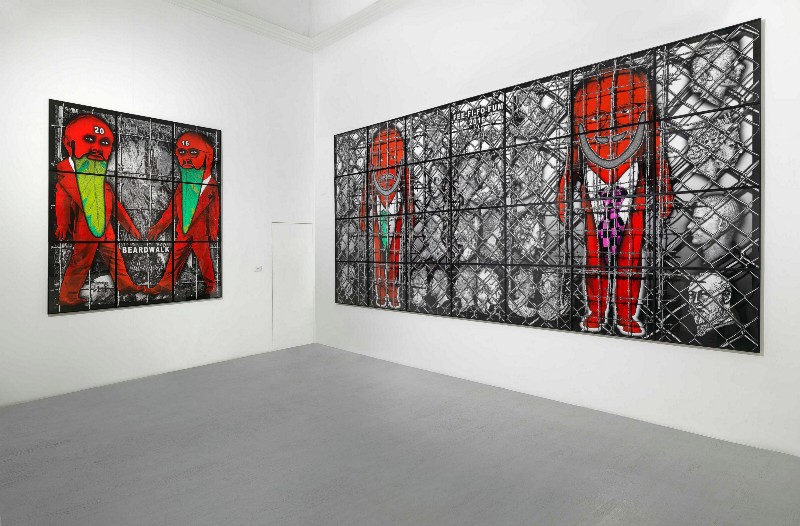 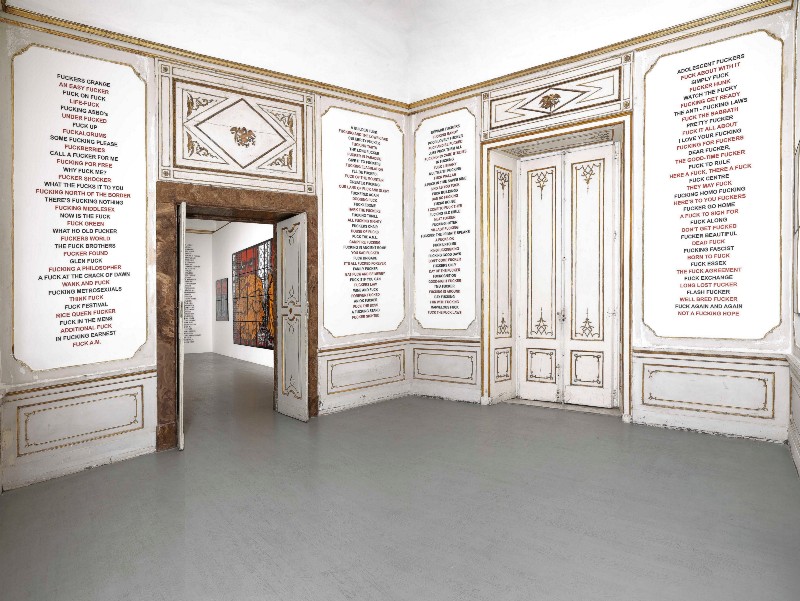 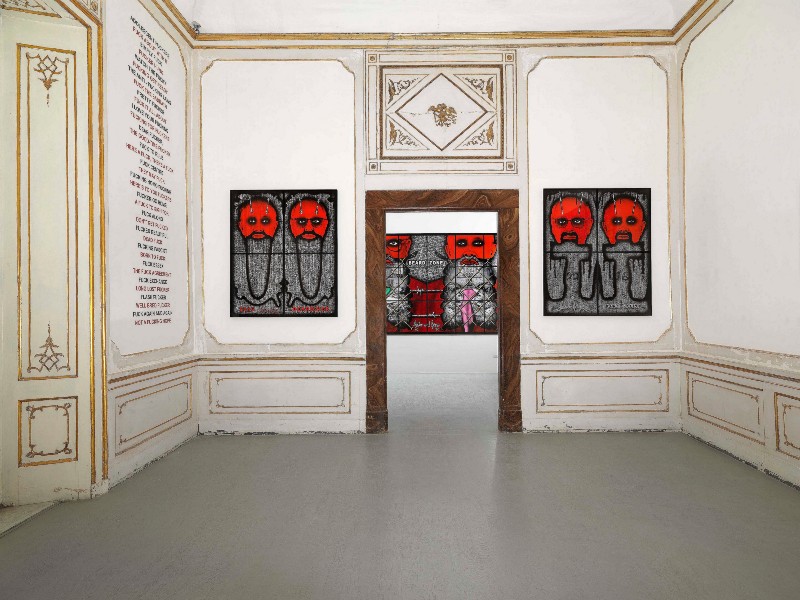 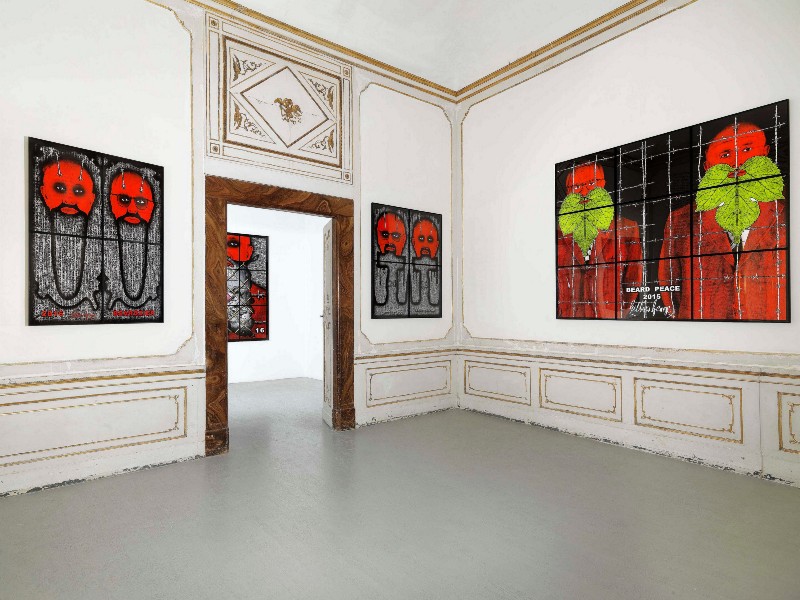 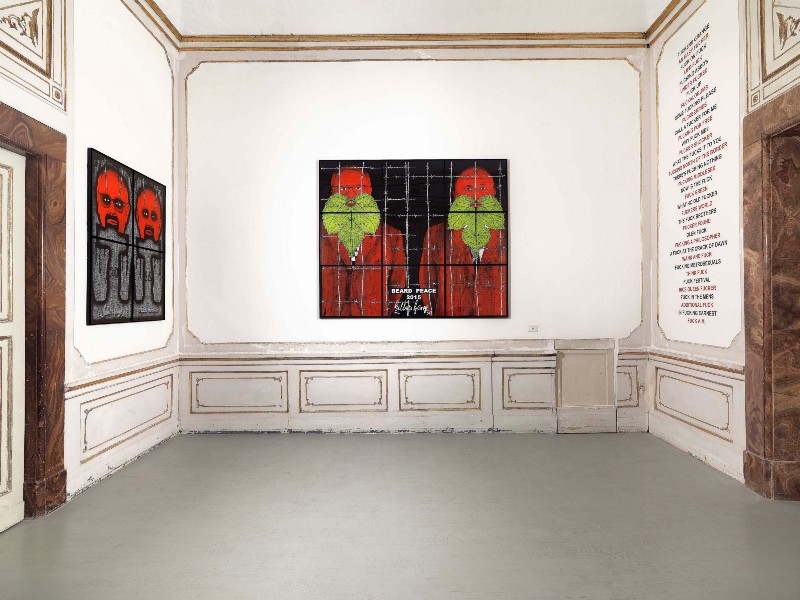 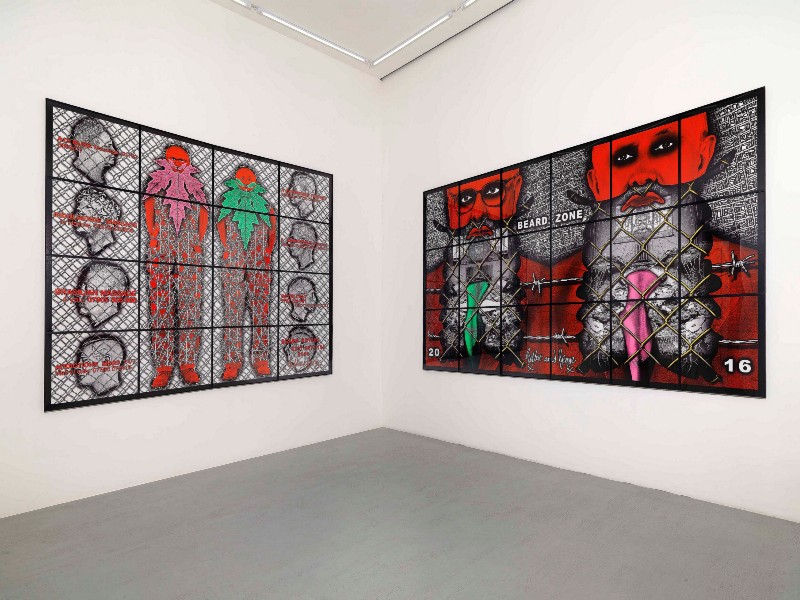 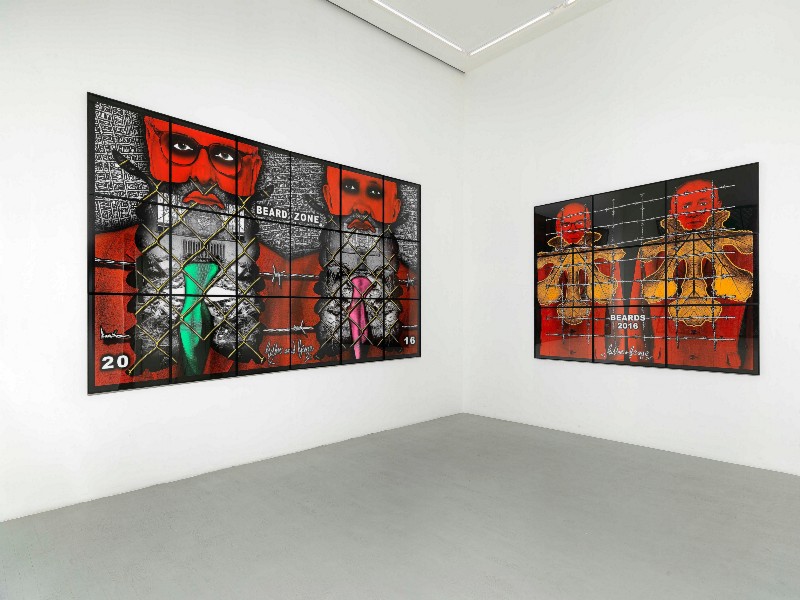 Alfonso Artiaco gallery is pleased to announce the opening of the exhibition of Gilbert & George THE BEARD PICTURES, on Saturday, December 16th, 2017 at 7.00 pm, the artists will be present.

In honor of the 50th anniversary of when the British artists first met, Gilbert & George present the new series THE BEARD PICTURES at Alfonso Artiaco Gallery. For their fourth exhibition at the gallery (2009, 2011 and 2012), 21 monumental works from their last series will be on view.

THE BEARD PICTURES are violent, eerie, grotesque, lurid and crazed. They show a dream-like world of paranoia and destruction and madness. Their strange sickly colours and creeping, smashed up, absurd landscapes confront the viewer with relentless aggression. THE BEARD PICTURES depict a world bereft of reason, in which negotiation no longer exists.

Gilbert & George take their places within THE BEARD PICTURES as intense, red, staring, empty-headed and sinister versions of themselves. Their eyes are shadowed and bizarrely prettified. Mutant impish explorers or dead-headed sentinels, they seem to look at, into and through the viewer. They look possessed and serious. They look as though their spirits might have left their bodies. They look stern, absurd, imprisoned, mocking and mocked.

In each picture they wear beards that are surreal and symbolic. Beards made of wire mesh, beards made of beer foam, beards made of flowers, beards comprising rabbits with snakes for tongues. Secular and sacred, the throwback emblem of hip millennial youth as well as a mark of religious faith, the beard is depicted in THE BEARD PICTURES as both mask and meaning: a sign of the times.

In some of THE BEARD PICTURES, the artists stand either in front of a barbed wire or mesh fence, or behind one. Elsewhere, rusted steel rods sprout from collapsing buildings of pre-stressed concrete. In yet other pictures, Gilbert & George are unsmiling comic grotesques, with tiny bodies and huge heads. Behind them a blank silvery void, extravagant ornamental foliage, wire mesh fencing, newspaper advertisements for bouncers, builders and sex workers, the heads in relief of popes, monarchs, worthies and heroes.
Aggressively absurd, trashing contemporary artistic niceties but resonant with intense symbolism, THE BEARD PICTURES turn history into a mad parade, their mood shape-shifting between that of science fiction, lucid dreaming and Victorian caricature. It is a vision and a form which brings to mind Oscar Wilde's account of Walter Pater's 'Essays':
"….others are medieval in their strangeness of colour and passionate suggestion, and all of them absolutely modern, in the true meaning of the term modernity. For he to whom the present is the only thing that is present, knows nothing of the age in which he lives."
In the half century that they have lived and worked together as Living Sculptures, embarked on a visionary journey through the modern world, always together and always alone, Gilbert & George have made fiercely singular Anti-Art that is poetic, primal and emotionally driven. Order and madness are held in tension, vaudevillian and nursery rhyme absurdity take on the air of paranormal ritual.

The more the viewer contemplates THE BEARD PICTURES, the more Gilbert & George appear like poltergeists within the cause of art and spirit sentinels within a world gone mad. In this chaos of trashed aesthetics and reversed values, all has become symbol and surface: mad symbols, presented with deadly seriousness. And as such they study the viewer.

The exhibition is accompanied by a fully illustrated catalogue, designed by Gilbert & George and published by Alfonso Artiaco Gallery, with an essay by Michael Bracewell.