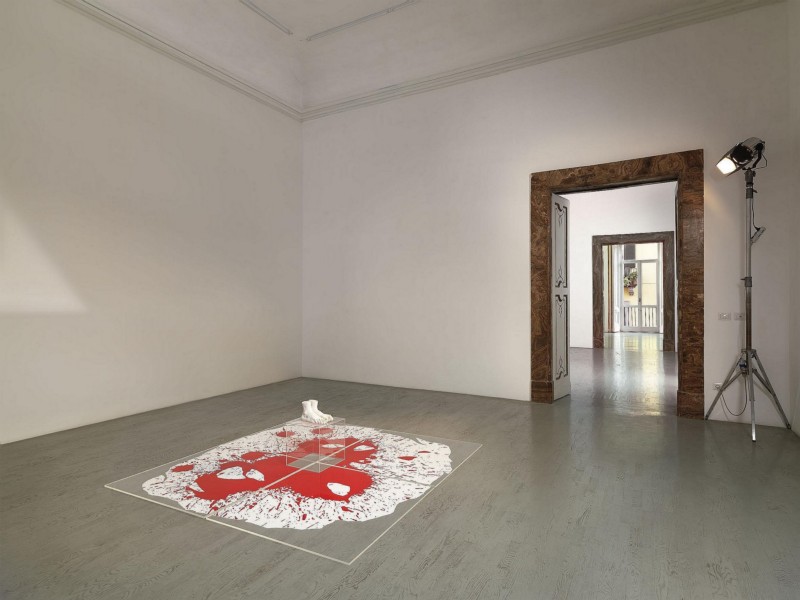 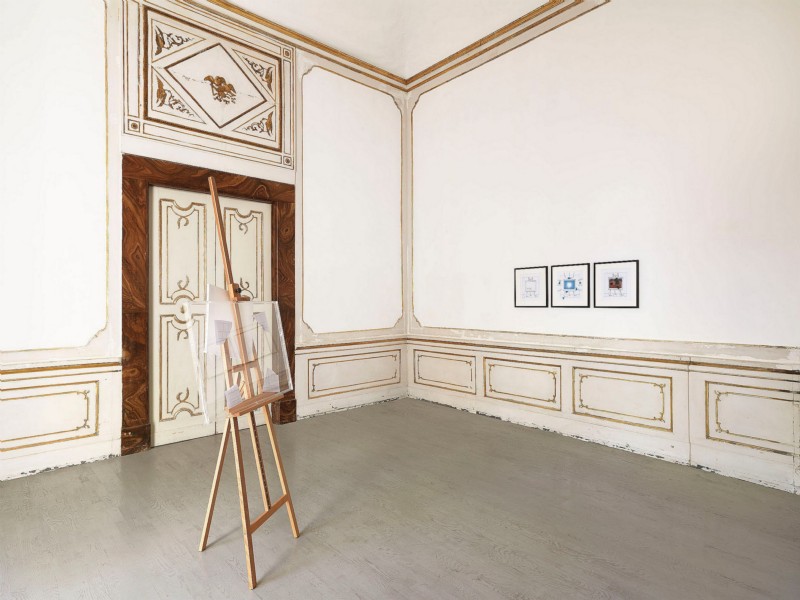 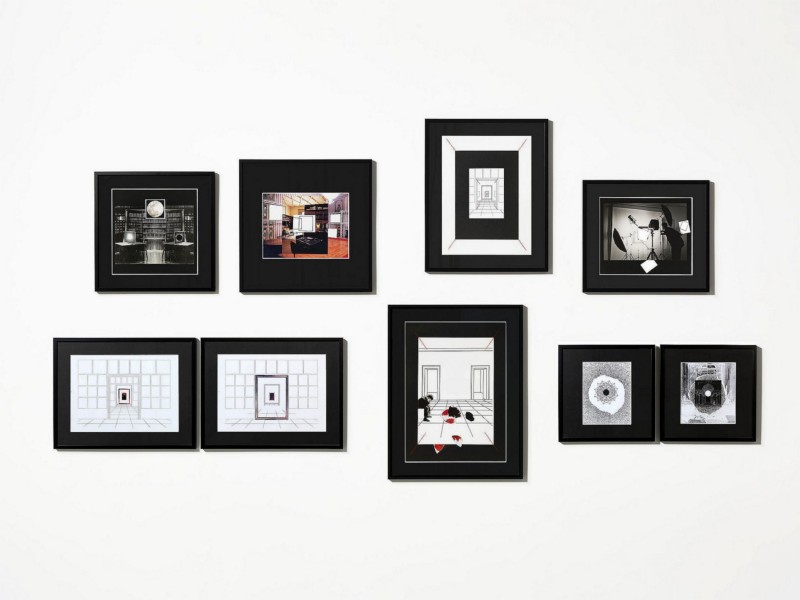 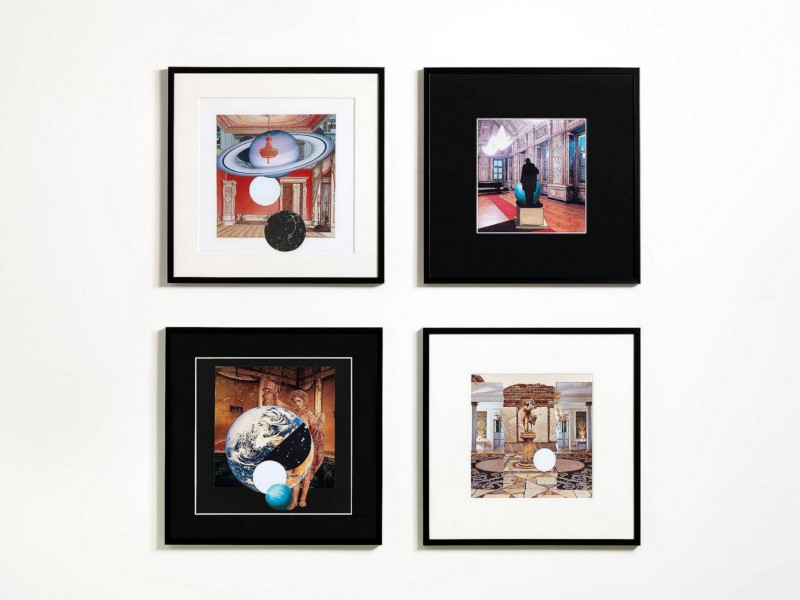 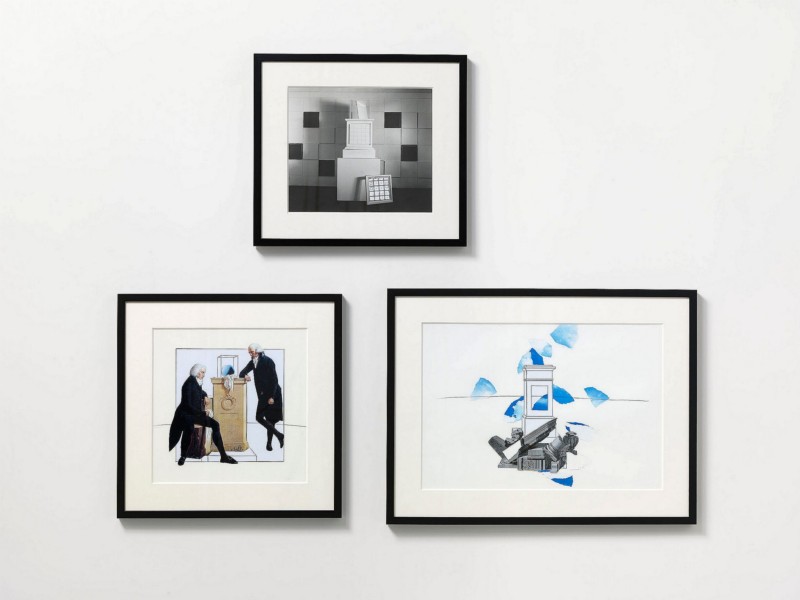 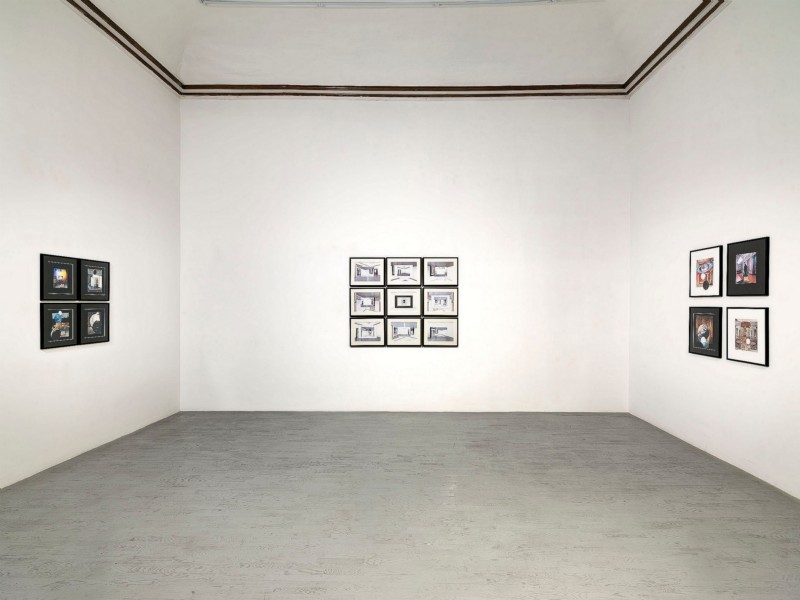 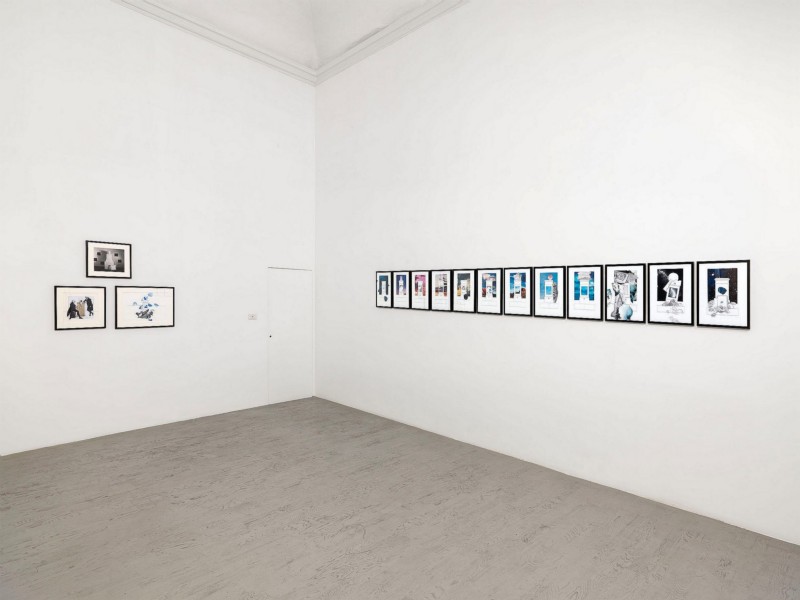 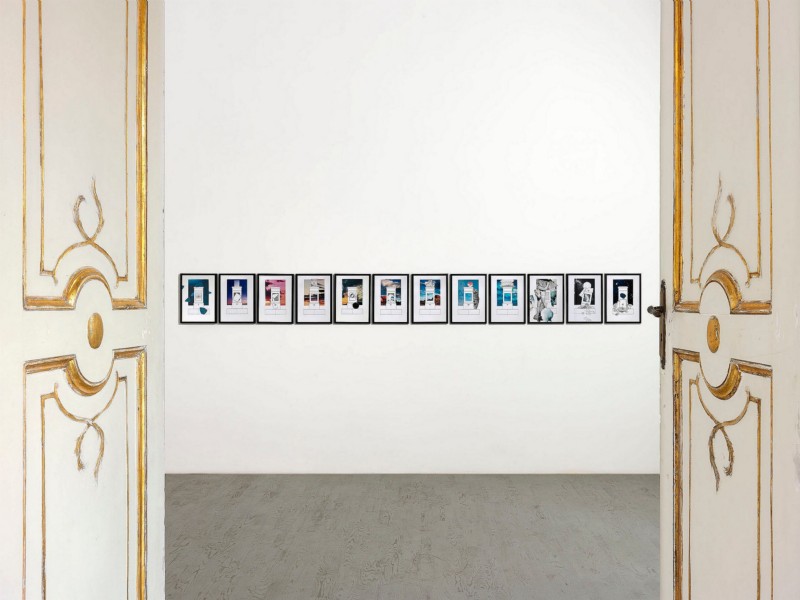 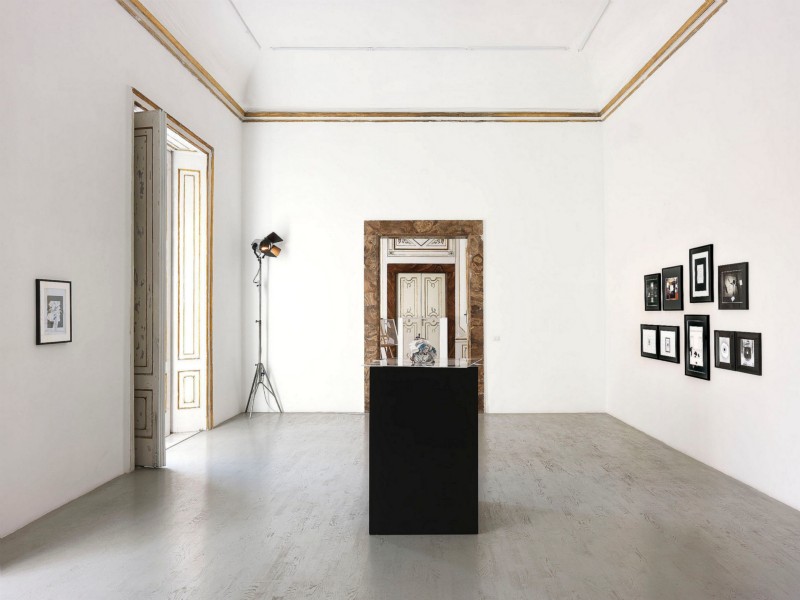 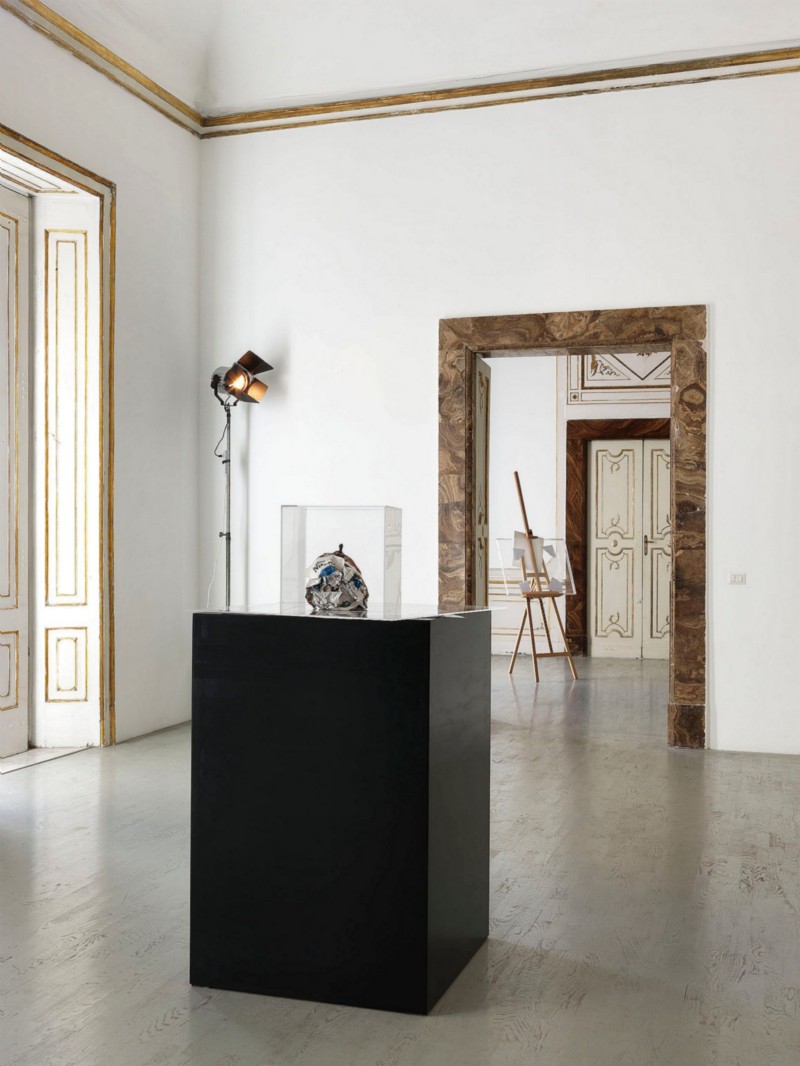 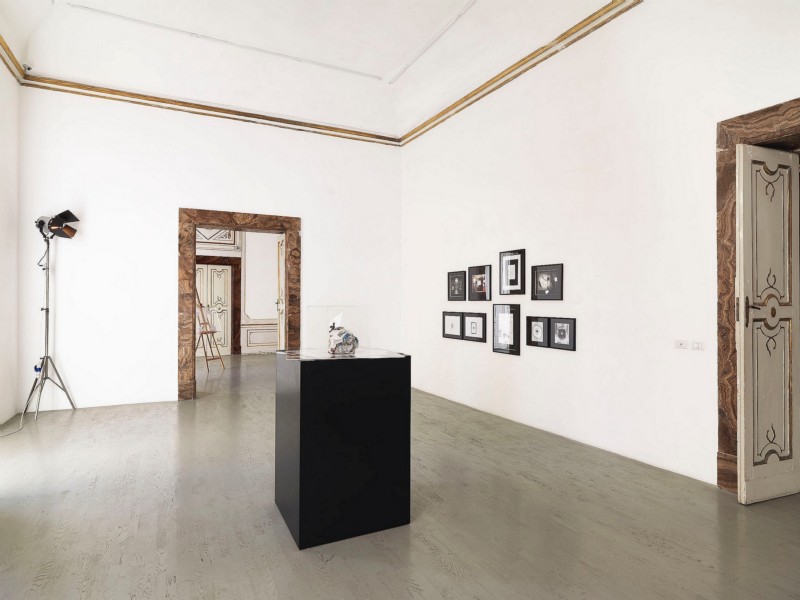 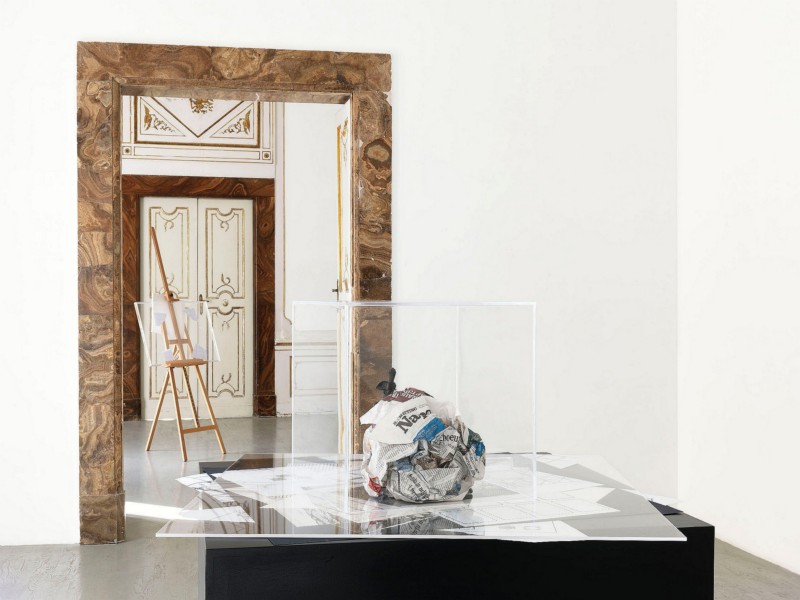 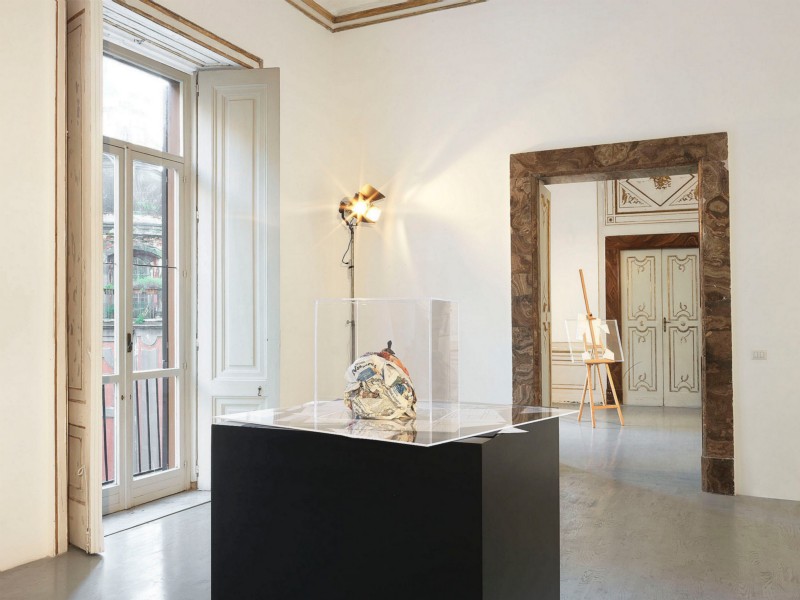 Alfonso Artiaco gallery is pleased to announce the opening of the exhibition by Giulio Paolini on Friday, February 7, 2014 at 7 pm.

The exhibition opens with Red Carpet, which is already announced by the invitation's image. If the title refers to the uniform surface of the symbolic red carpet used for guests of honour and prestigious walkways, the artwork installed on the ground suggests, on the contrary, an irregular spot of blood colour that evokes a fatal accident (the image turned in red refers to the ink stain of Sainte Vierge II by Francis Picabia). At the centre, the plaster casts of two feet, placed at an elevated position on a small Plexiglas box, allude in their pure white smoothness to a presence, a hypothetical figure, in sharp contrast with the tragic atmosphere of the spot on the ground. Between the two levels - the artist says – the eye measures "the distance between conceiving to be there and its impossibility."

The second room hosts the enigmas of Villa dei Misteri, a title borrowed from the famous Roman dwelling in the archaeological site of Pompeii. In the main artwork, Villa dei Misteri, the images of the gallery's empty spaces are dismantled and reassembled in a circular maze, while the central element of the composition proposes a drawing of rooms in perspective that converge into a blind frame.
Studies for "Villa dei Misteri" propose surreal atmospheres based on the combination of incongruous iconographic elements of different origin (distinctive themes from the artist's repertoire - planets, mythological figures, sculptural objects - set in attractive interior spaces).
In the third room, Senza piů titolo presents a group of torn images (drawings, studies, photographic reproductions) on a black base, held in place by a Plexiglas plate and topped by a Plexiglas case in the centre. Within the case, a small cast bronze figure of a policeman watches over the mysterious presence of a few pages of crumpled newspaper. The institutional figure, half-hidden by the "foreign body", seems to ensure the inviolability of the mystery, which presides to the becoming of something unknown as suggested by the torn images and the crumpled newspaper sheets.
Several works on paper propose other perspectives that invite the eye to enter the search for an unknown image.

The fourth room is dedicated to Promenade, which aligns twelve different moments of the same subject - the profile of a base - combined with iconographic elements and set in front of a changing sky.

The fifth and final room hosts Terra di nessuno: at the centre of the room there is an easel with an empty Plexiglas case containing four fragments of a drawing and a primed canvas is set in oblique position between its struts. All components refer to a picture but do not reveal it: the gaze captures the suggestions but gets lost even before the vision is complete.