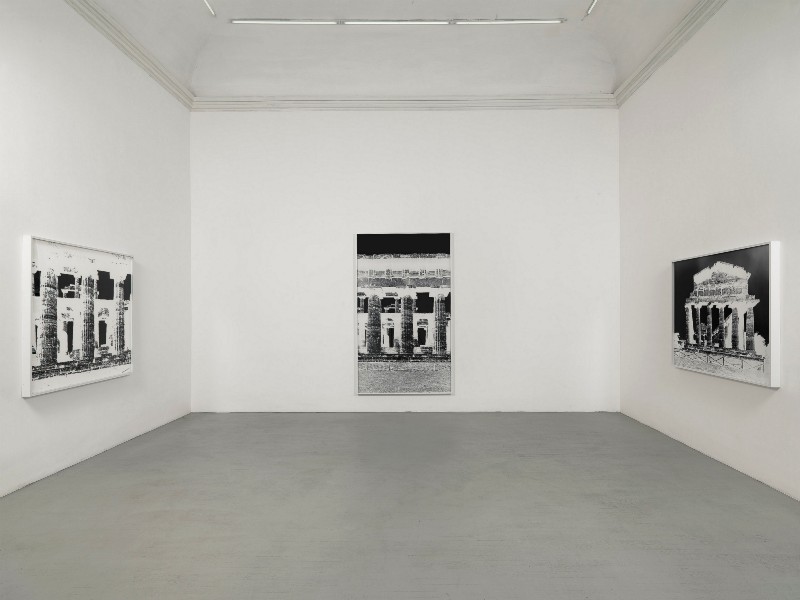 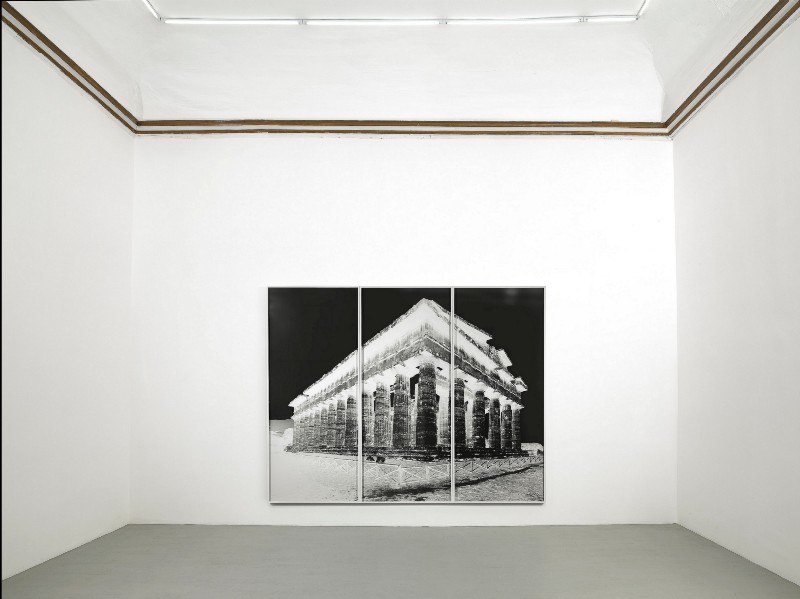 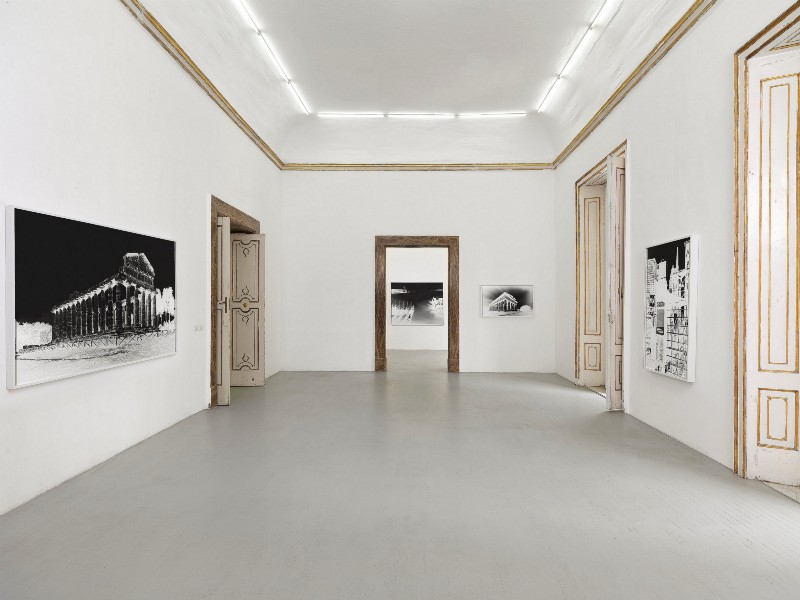 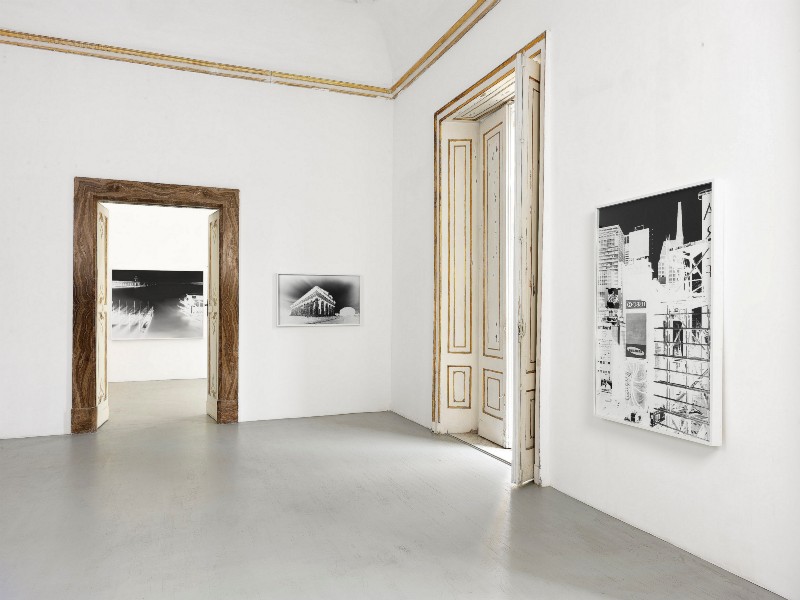 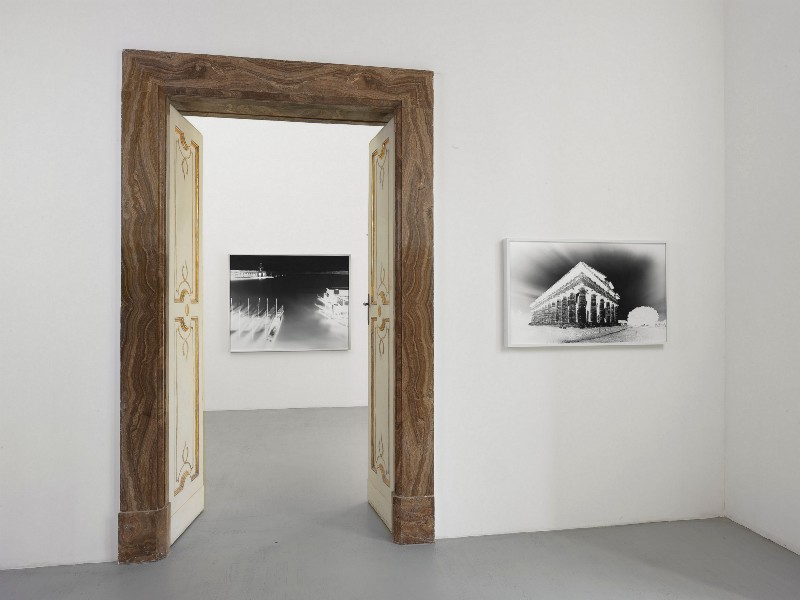 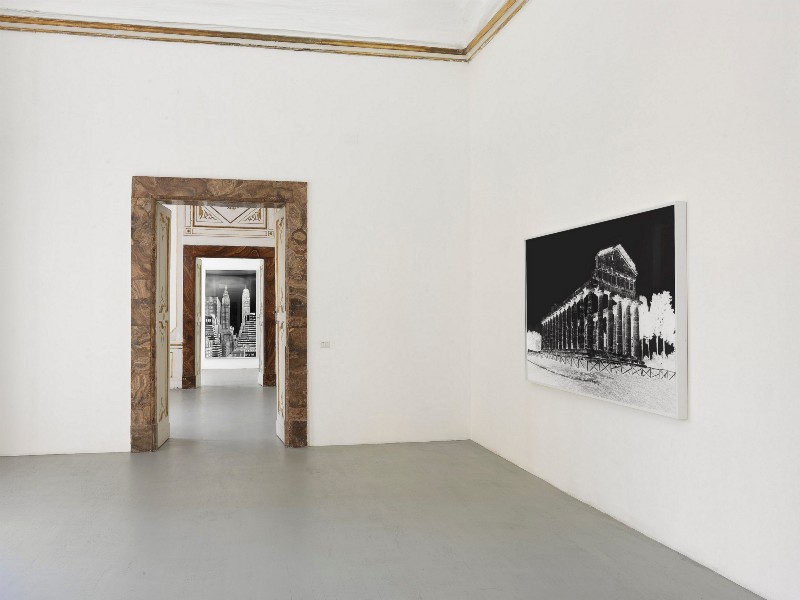 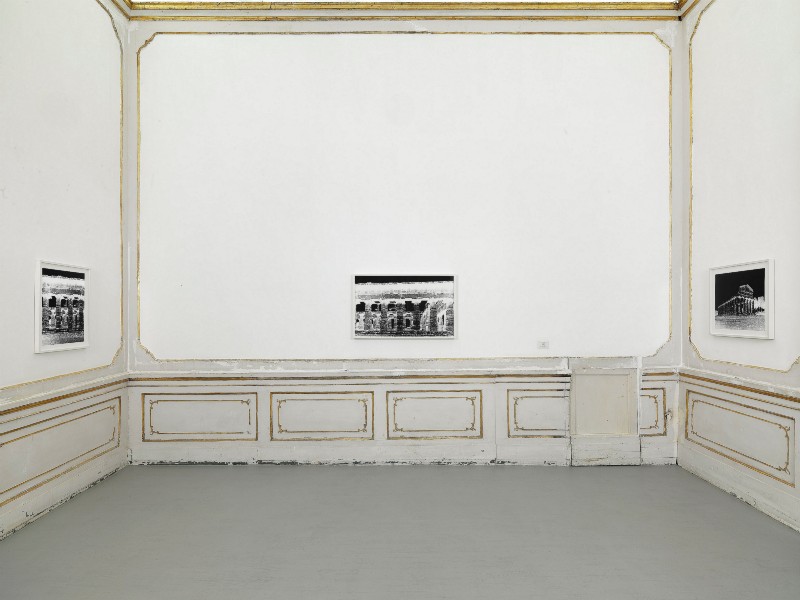 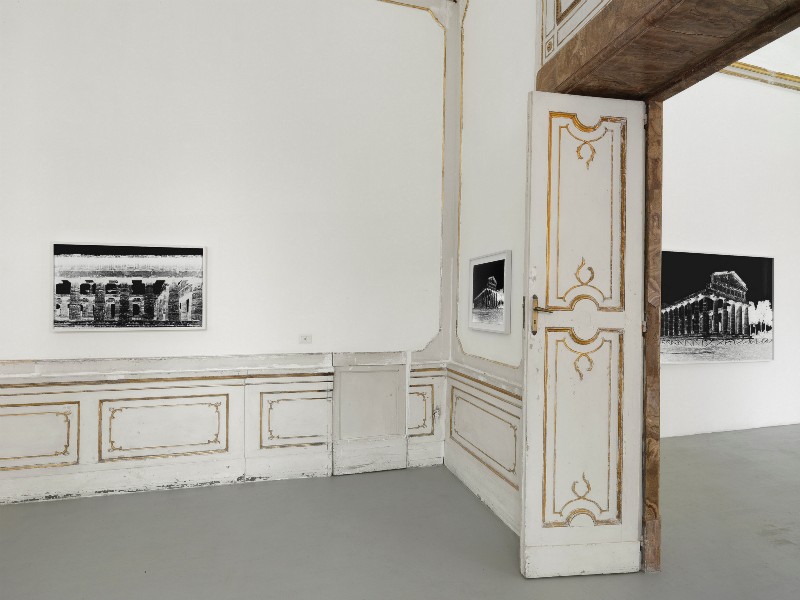 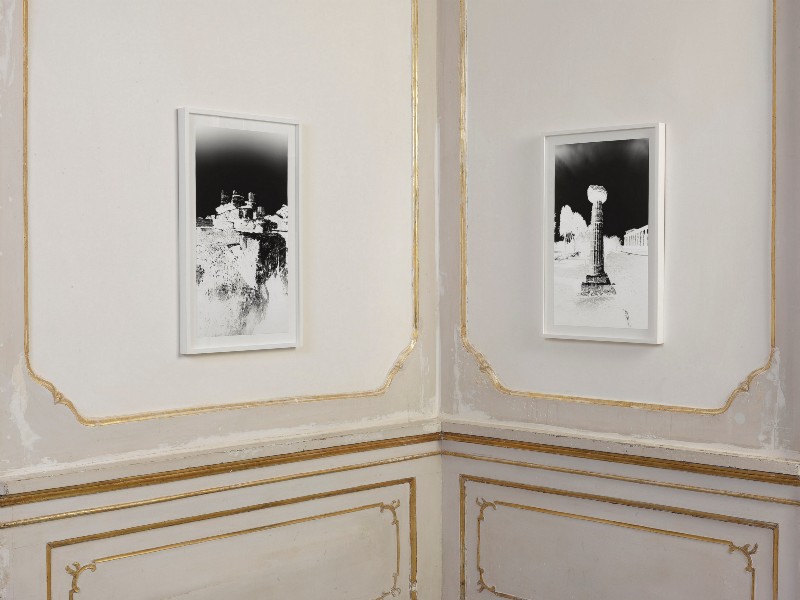 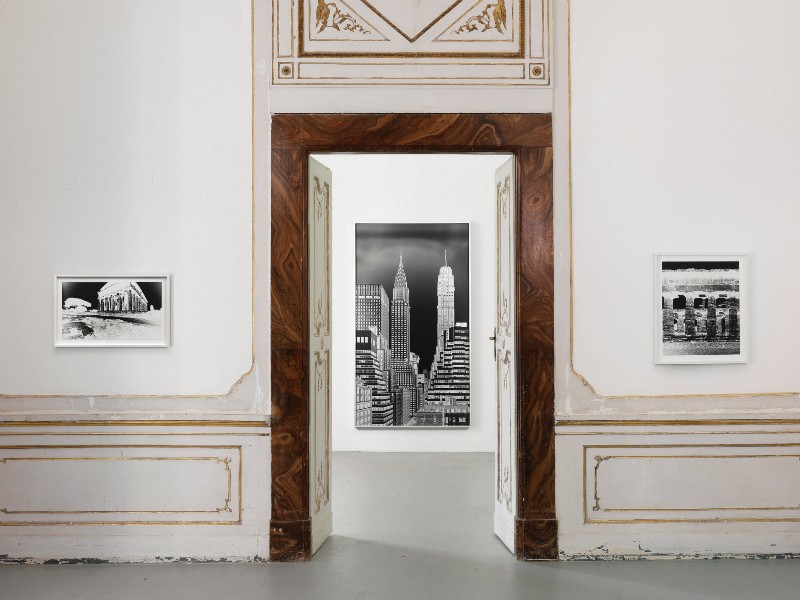 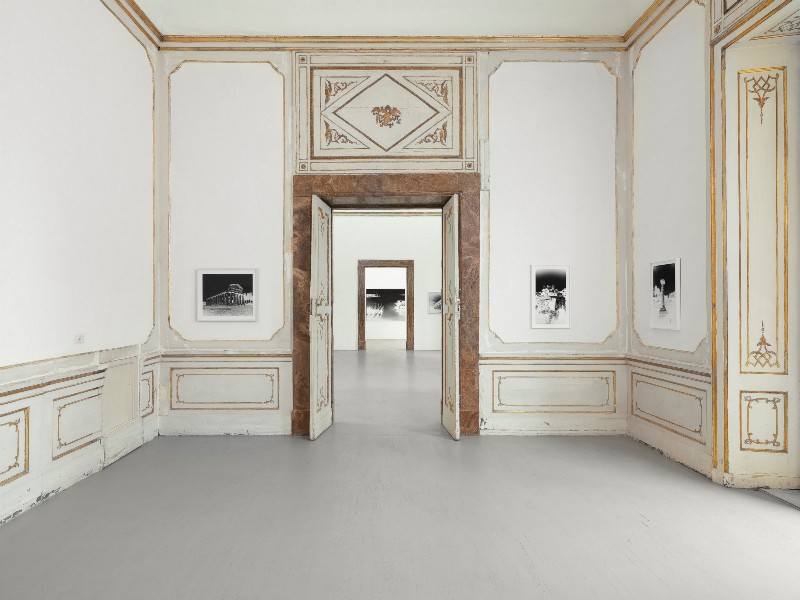 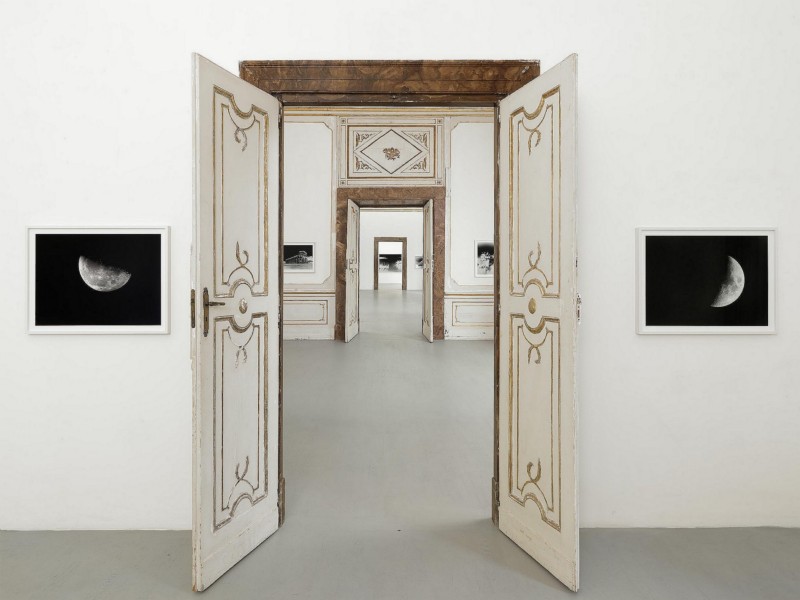 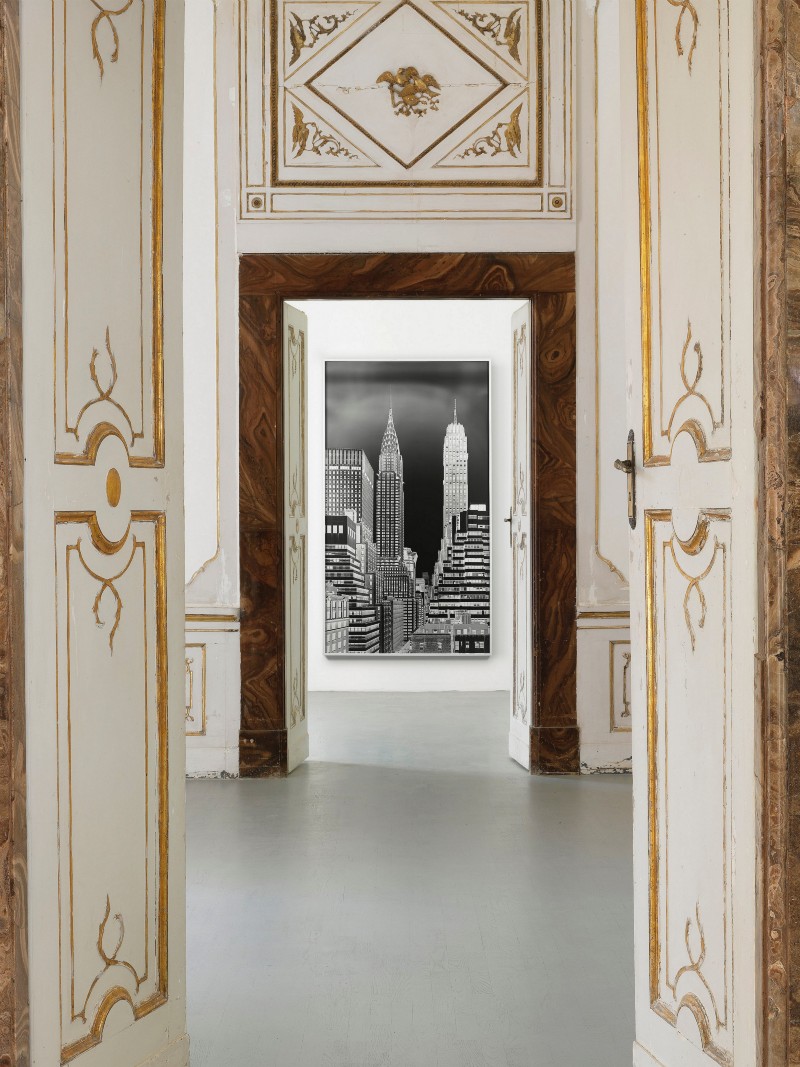 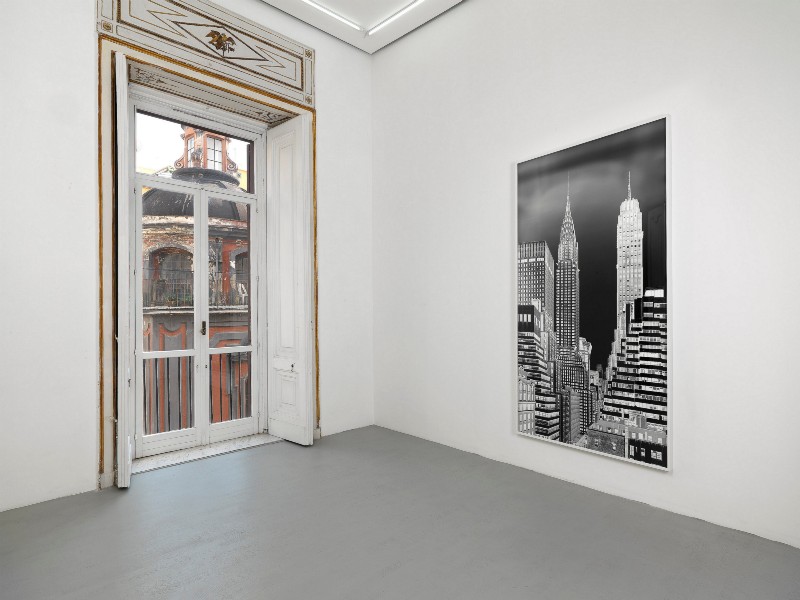 Alfonso Artiaco gallery is pleased to announce the opening of Vera Lutter's solo exhibition "Paestum", on Thursday, September 8th at 7:00 p.m. The artist will be present.

After the last exhibition in 2011, the Alfonso Artiaco gallery is hosting a new solo show of the German-born artist Vera Lutter to present the latest series dedicated to Paestum, supported in collaboration with the gallery.

The images are rendered with the technique of the camera obscura in which a large room substitutes as a camera. By involving an exposure time of hours, days or weeks, Vera Lutter's works register the passage of time, the State of Flows. "Each image is retained in its negative, consequently becoming a unique piece that cannot be altered or multiplied". The quality and the accuracy of the photographic lens are sacrificed for the sake of a less precise, deliberately primitive, pinhole camera that exploits the possibilities of creativity to their full extent, delivering on the photographic support a reality which is emptied of its fictitious weights and meanings by the mere action of the light.

The show is featuring 17 black and white works including excerpts from the less recent series of New York and Venice. Living in New York since the early 1990s, metropolitan landscapes have long held a deep influence in her artistic practice and these early works testify the investigation into the architectural and visual experience in fast changing urban and industrial environments and the impacts the man-made world produces on our lives and perception of time and space.

Dialectically distant are the unaltered Venetian landmarks and the waterways that make the lagoon unique. "The water in these photographs, the same water that constitutes the very special beauty of Venice and the quality of its light, is ironically also the constant threat of the city's ruin."

For the realization of the Paestum series, the artist has turned a shipping container, placed for a month in front of the colossal temples of Atena and Nettuno, into a camera obscura.
The use of a transient architecture as medium (the camera is a transportation vehicle indeed) and the stillness of the subject matter (the temples) are two parallels that remark a conceptual investigation within. "The process also allows for an intimate entry of the distant world into the privacy of my large camera, which I inhabit during every exposure." (Vera Lutter)
In a dialogue with the previous metropolitan and Venetian works, the Paestum series tackles new horizons in her investigation: highlighting the relationship between change and timelessness and the distinction between place and non-place, post-urban landscapes and monumental sites find a common ground in her practice, the former, delivering an eerie silence and sense of uniqueness despite the massive urban transformations they are undergoing, and the latter, commodified into a transient and immediate touristic experience, regain their Aura through her photographs.